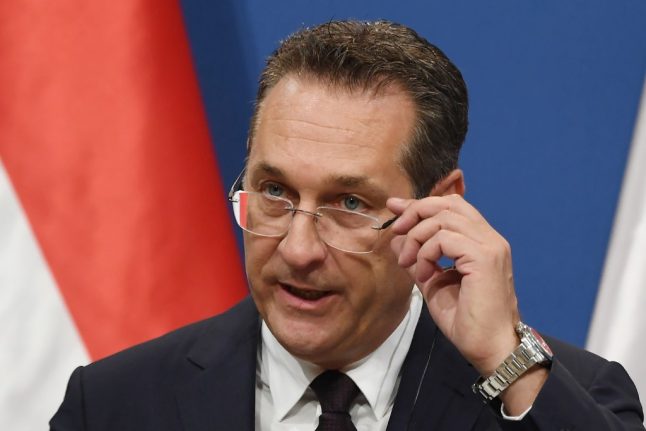 In the recordings Strache and party colleague, MP Johann Gudenus, are seen discussing with a woman purporting to be the niece of a Russian oligarch how she can invest in Austria, specifically to gain control of the country's largest-circulation tabloid, the Krone Zeitung.

According the newspapers, Strache says that there would be no resistance among the Krone's editorial staff as “journalists are the biggest whores on the planet”.

Both the newspapers that published the footage say they don't have any firm information over who set up the elaborate sting, filmed in a luxury villa on the island of Ibiza.

Strache admitted the meeting took place but denies any wrongdoing.

He told the Sueddeutsche Zeitung that “a lot of alcohol was consumed as the evening progressed” and that there was a “high language barrier” during the conversation.

The Freedom Party also said that it was considering legal action as the video had been “illegally recorded”.

Elsewhere in the video Strache evokes the possibility of privatising part of Austria's public broadcaster ORF and says he would like Austria's media landscape to resemble that in neighbouring Hungary.

Hungary's right-wing nationalist Prime Minister Viktor Orban has overhauled the country's public media into a government propaganda organ while allies have steadily bought up swathes of the private media sector.

Strache also appears to hint at possible ways political donations could be made outside normal channels to escape legal scrutiny.

The latest allegations against Strache, just days before key EU elections, could increase tensions in the Freedom Party's coalition with the centre-right People's Party of Chancellor Sebastian Kurz.

In recent weeks Kurz has already had to defend his decision to enter government with the far-right after a string of revelations about extremist sympathies in the FPOe's ranks.

A government spokesman said that Kurz would make a statement on the matter on Saturday.

Public broadcaster ORF reported that the FPOe's lead candidate in next week's elections, MEP Harald Vilimsky, had cancelled a planned trip to Milan on Saturday where he was due to take part in a campaign event with far-right Italian Interior Minister Matteo Salvini.