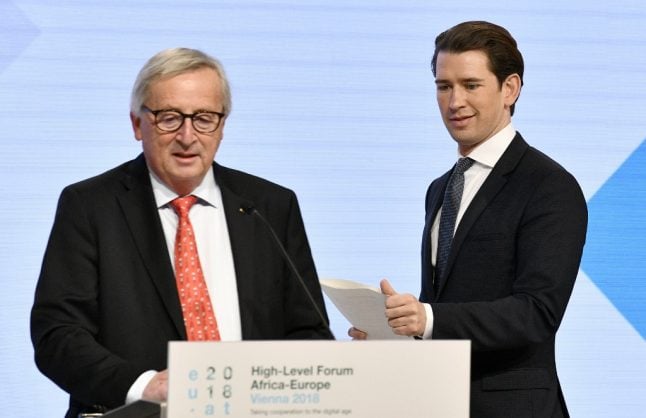 Juncker and Kurz at the EU-Africa Forum in December 2018 Photo: AFP
“One cannot underestimate the danger from the right. My concern is that the image of Europe will become darker when the traditional European parties make verbal compromises with the extreme right,” Juncker told the Austrian Der Standard newspaper.
He said he would advise his own Christian Social People's Party from Luxembourg to leave the European People's Party (EPP) if the grouping makes a deal with far-right parties.
Far-right parties across Europe are expected to make gains in the May 26 European parliament elections, banking on voters' anger over immigration and disillusionment with what they see as an entrenched political elite.
Juncker warned that debates in the European parliament would be “strongly affected” if far-right and far-left parties have a “too strong influence”, while a commission that depended on their support would be “incapable of acting”.
In the interview he also took a swipe at Chancellor Sebastian Kurz, whose conservative party has governed Austria in a coalition with a far-right faction since late 2017.
Kurz earlier this month called for a renegotiation of the EU's Lisbon Treaty and tough action against countries allowing migrants to transit their territory, as well as a reduction in the size of the European Commission.
“I think Kurz is a convinced, steadfast European,” Juncker said, but added: “I don't think it's good that he, who stands for Europe, is now adding his voice to the chorus of opponents”.
Juncker's comments came after nationalist Hungarian Prime Minister Viktor Orban suggested replicating the “Austrian model” of a coalition between centre-right and far-right at a European level.
Manfred Weber, the EPP's candidate to replace Juncker as head of the commission, has set himself against such an alliance.
Orban's party belongs to the EPP but has been suspended amid a spat with Brussels.