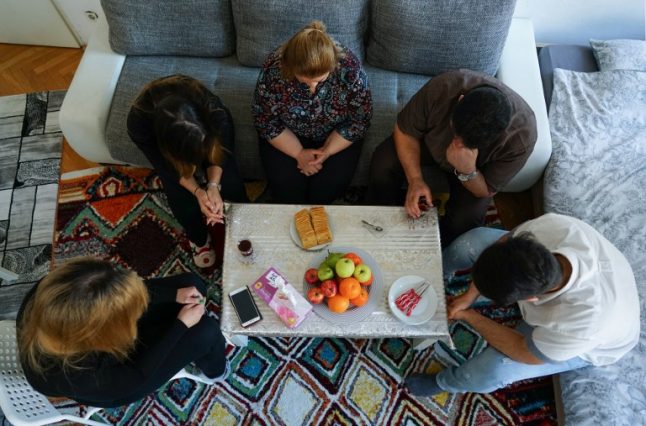 A family of Iranian refugees, members of the country's Mandaean minority, sit in an apartment in Vienna , Austria on January 17, 2019. Photo: AFP

When Mahbud, 26, arrived in Vienna from Iran two years ago, he hadn't planned to stay here very long: he dreamt of moving to the United States and becoming an engineer.

But along with more than 100 other Iranian refugees, he says his hopes have been dashed and he has been left stranded in Austria by US restrictions on refugees and immigrants.

Mahbud belongs to a persecuted religious minority and left the Islamic Republic under a programme run by a US refugee charity, HIAS.

Originally founded to help Jewish refugees who fled to the US, HIAS expanded its resettlement work to non-Jewish asylum-seekers in the early 2000s and says it has helped 25,000 Iranians from religious minorities flee the country since then.

Because Tehran and Washington have no diplomatic relations, the refugees have traditionally been channelled through Austria, where they are temporarily housed while final checks are made by US authorities.

Mahbud arrived in Austria at around the time of US President Donald Trump's first travel ban in January 2017 — and it was then that his dreams of a new life in the US began to evaporate. After more than a year of waiting and uncertainty, HIAS finally got in touch to say that his application had been closed.

“You plan your life, you have all these dreams that you are going to… live freely and in just a moment they say: 'We can not do anything for you',” Mahbud says.

“I thought: 'OK, my life's probably over, there is nothing that I can do about it'.”

His position in Austria was equally uncertain: HIAS warned he could be expelled within a matter of weeks.

Church steps in to help

Mahbud's plight and that of others like him came to the attention of Vienna's archbishop, Cardinal Christoph Schoenborn, in September 2017, when the diocese's adviser on refugee issues, Manuel Baghdi, was contacted by a Iranian family who had found themselves destitute.

As dozens of similar cases piled up, the Church decided to help arrange housing and drum up donations for the refugees.

Requests for clarity from US authorities as to why they had been refused fell on deaf ears.

“Of course we tried, but we always got the answer: 'No comment',” Baghdi said

Approached for comment by AFP, the US State Department denied that the sharp increase in the number of refusals for the Vienna programme was due to Trump's travel ban, saying instead it was because of changes in the US Refugee Admissions Program in 2016.

However, it's not clear what these could be: in 2016 President Obama had in fact raised the proposed ceiling for refugee admissions, but in January 2017 this was cut by Trump by more than half and the refugee admission programme was suspended for 120 days.

Like Mahbud, most of the Iranians stuck in Vienna have now applied for refugee status in Austria and are trying to build their lives in a country where they don't speak the language.

A family of five from Iran's Mandaean minority are housed in the same building as Mahbud.

In the small two-bedroom apartment they call home, the parents, two daughters and a son relate the daily discriminations they suffered in Iran, and the pressure they faced to renounce their faith.

The father, Ahmed, insists that returning to Iran is not an option. And despite the family's current financial difficulties, he is full of praise for Austria.

“The freedom that my wife and my daughters have here, the personal freedom — I think there's nowhere in the world like Austria in that regard.”

He even goes as far as to say: “Thank God that we are in this country and we didn't end up in America!”

For Mahbud, too, the American dream is definitely over.

“The United States of America just played us for two years. How can we be hopeful with them after these two years of torture?” he said.

For the time being, he is focused on getting his degree recognised in Austria and is hoping to continue his studies.

Nevertheless he insists “there is no obstacle that I cannot overcome”. Even the daunting prospect of learning German won't put him off.

It's a sentiment that perhaps Ahmed's two daughters also share as they politely take their leave and head to their afternoon German classes.