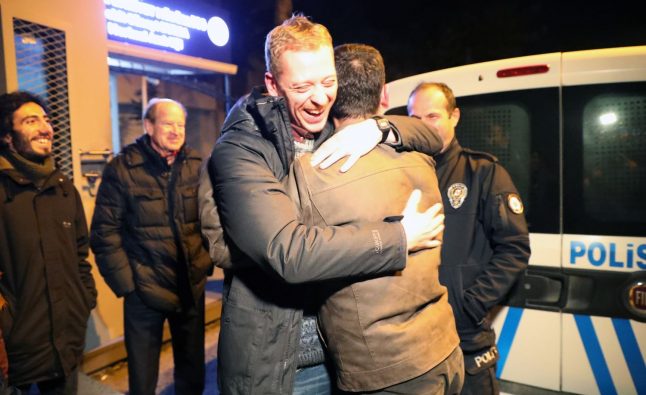 Austrian journalist Max Zirngast hugs a relative as he is released from Sincan prison in Ankara on December 24, 2018. Photo: Adem Altan/AFP.

An Ankara court registered a charge against him of being “a member of an armed terrorist organisation”, then ordered his release pending trial, the daily Hurriyet reported.

He is accused of having links to the extreme leftist Turkish Communist Party (TKP)/Kivilcim group, which is banned by Turkey as a terror organisation.

Zirngast, who writes for the far-left German-language magazine Re:volt, denies the charge against him.

“We will continue to press for a rapid conclusion of the criminal proceedings. I wish Mr Zirngast a Merry Christmas under these circumstances,” she posted on Twitter.

Zirngast published articles on the outlawed Kurdistan Workers' Party (PKK), which has waged an insurgency against the Turkish state since 1984. The PKK is banned as a terrorist organisation by Ankara and its Western allies.

Zirngast has been in Turkey for three years and was a masters student at Middle East Technical University (ODTU) in the political sciences department.

In an opinion piece for the Washington Post in November, he wrote that his arrest was “a perverse confirmation of the authoritarianism I've spent the past several years chronicling and opposing”.

He also criticised the attempt to “silence the entire democratic opposition in Ankara”.