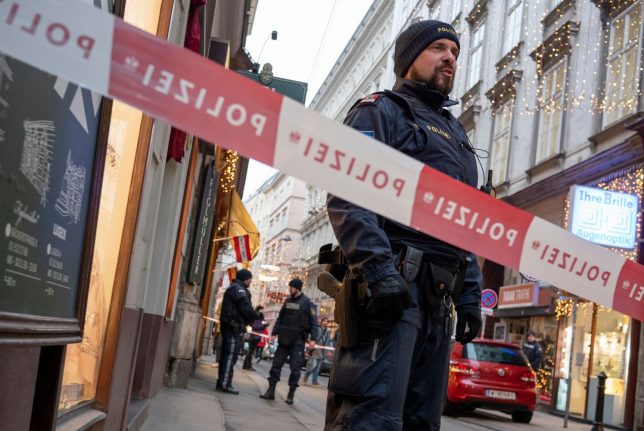 Austrian policemen stand guard at the site of a shooting outside Figlmüller passage in the city center of Vienna, Austria, on December 21, 2018. Photo: AFP.

“At the moment the crime looks as though it is connected to organised crime in the Western Balkans region,” the statement said.

The shooting, which happened at around 13:30 local time on Friday, briefly sparked panic in the historic centre of the Austrian capital, in an area popular with tourists.

The two victims, aged 32 and 23, were part of a group of three men who were shot at by another man shortly after they left a restaurant.

The shooter escaped on foot — not in a car as some eyewitnesses had reported — and has not yet been found.

Police described him as around 30 years old, 1.85m tall and wearing a dark jacket with the hood pulled up.

The shooting sparked a city-wide manhunt which is still underway, with police saying enquiries were also being made in other countries.

The 29-year-old man who accompanied the two victims, but who escaped unharmed, is being questioned as a witness.