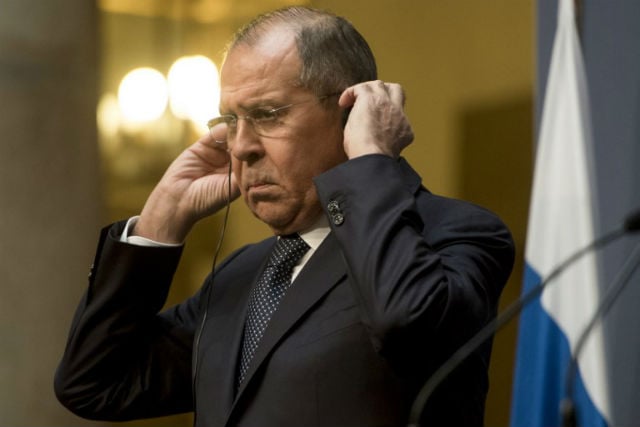 Russian Foreign Minister on a visit to Madrid last week. Photo: Curto de la Torre/AFP
On Friday, Austrian Chancellor Sebastian Kurz said a probe had been launched into a colonel suspected of spying for Russia for several decades.
The spy row risks hurting Russia's ties with one of its few European allies.
It is the latest in a string of cases where Moscow has been accused of espionage in EU states and elsewhere.
Moscow said Austrian Foreign Minister Karin Kneissl called her Russian counterpart Sergei Lavrov to explain Vienna's motives.
She “expressed hope that the steps will not affect the further development of bilateral cooperation,” the Russian foreign ministry said in a statement.
Lavrov reiterated Moscow's displeasure that Austria chose to air its grievances in public.
He said the practice of voicing “unfounded accusations” publicly was unacceptable, the foreign ministry said.
“Any possible mutual concerns should be discussed through established channels of dialogue and be based on facts,” the statement said.
However, Kneissl said in a statement that during the call she had defended Austria's actions, which were “based on solid facts”.
“The matter relates to events which are punishable by law and necessitated the involvement of prosecutors, which meant it was unavoidable to make the information public immediately,” the statement said.
“We expect the full cooperation of the Russian authorities in explaining this case,” Kneissl said, calling it “unacceptable interference in internal affairs”.
In August, Kneissl sparked a row in Austria and beyond after she waltzed with Russian President Vladimir Putin and bowed to him at her wedding, with critics saying her behaviour hurt the country's image.
The 70-year-old suspect at the centre of the row was taken in to custody for questioning on Saturday. Austria suspects him of working with Russian intelligence for several decades and is investigating him for allegedly revealing state secrets.
Austrian defence ministry spokesman Col Michael Bauer Bauer told the Kurier newspaper on Saturday that the information passed on by the suspect “ranged from unimportant things to more sensitive information”.
However, other media reports suggested that the colonel wasn't in a position to reveal the highest levels of classified data.
The Salzburger Nachrichten newspaper reported suspicions that he had passed on information from NATO seminars and courses he had attended, as well as information available on the army's intranet system.
The paper says he also provided written portraits of various army members and his impressions of the mood inside different army departments.
Austria is not a member of NATO and sets great store by its status as a neutral country.
It was one of the few European countries not to expel Russian diplomats following the poisoning of ex-spy Sergei Skripal and his daughter Yulia in Britain in March.