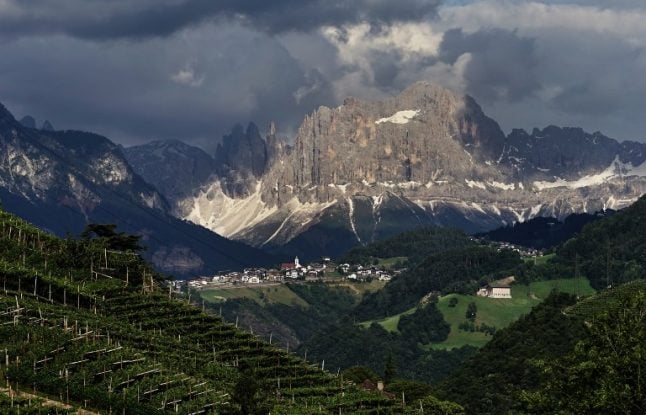 Vineyards near the Dolomites in South Tyrol. Photo: Joe Klamar/AFP

But the offer extends to speakers of German or the regional language Ladin — not to those who only speak Italian.

While the passport issue isn't on the ballot per se, and other issues such as immigration have dominated the campaign, the dual-nationality question has nevertheless been a hot-button topic. Proponents of dual citizenship claim it will forge a stronger European identity in the face of growing far-right and populist forces. But critics fear offering Austrian nationality only to German- and Ladin-speakers could prove divisive in a territory often held up as a model of peaceful cohabitation between the different linguistic groups.

And a furious Italian government sees Kurz's proposal as an attack on its sovereignty. “You can't give away passports without our consent,” Interior Minister Matteo Salvini said at the weekend. “A dual passport is out of the question.”

Vienna, which has yet to draw up a concrete roadmap for its scheme, has recently sought to calm the waters, promising to proceed solely with Rome's consent.

'We have nothing to do with Italy'

In South Tyrol's capital Bolzano, the low-key campaign is in evidence only through a few political posters in the town's green spaces.

For retired bank employee Rene, Austrian citizenship would be a dream come true. “We have nothing to do with Italy. It'll give us back a feeling of belonging to our Austrian homeland,” he told AFP.

Part of the Austro-Hungarian Empire for over five centuries, South Tyrol was ceded to Italy after World War I, but awarded autonomous status. Subjected to forced “Italianisation” by Benito Mussolini from the 1920s, just before World War II the province's German speakers were offered the option of “returning” to Nazi Germany or remaining as fully fledged Italians. In 1948, the rights of the three main language groups — German, Italian and Ladin — were enshrined in the territory's autonomy statute. But for many the dream of rejoining Austria, or attaining independence from Italy, never faded. There was even a series of separatist bombings during the 1950s and 1960s.

Everyone is required to identify with a linguistic group and according to the latest figures from 2014, 65 percent of the half-a-million-strong population feel themselves to be German speakers, 27 percent Italian and 4 percent Ladin. All public signs are trilingual and most people switch effortlessly between Italian and German.

Nevertheless, with its stunning views of the Dolomite mountains and traditional Alpine architecture, Bolzano has an undeniably Austrian feel. The restaurants that ring the main square all offer apple strudel. One store even sells that most quintessentially Viennese cake, the Sacher Torte.

The ideal of full independence is inscribed in the statutes of the ruling South Tyrolean People's Party, but its leading candidate, Arno Kompatscher, concedes that most people are happy with the status quo.

“According to polls by all parties, the top campaign issue is immigration. Dual citizenship comes very low down,” he told AFP.  He said he feared the issue could be instrumentalised by far-right or identitarian groupings.

Sven Knoll, a candidate for the more stridently pro-independence Die Freiheitlichen (Freedom) party, believes “there is already a political majority for dual citizenship, across party lines”. But Guenther Pallaver, political science professor at Innsbruck University, is sceptical. “With no concrete proposal on the table from Vienna and no official opinion polls on the matter, I think the debate will evaporate after Sunday's vote,” he told AFP.

Marc Roeggla, researcher in minority rights at the EURAC institute in Bolzano, said that even if a near-term solution seemed unlikely, the issue of dual citizenship would not go away. Vienna's mistake had been to announce the move unilaterally: “If everyone can come to the table as an equal partner from the very beginning, I really think it could work,” he said.

Maria Eichbichler, a shopowner in Bolzano, said she was all for dual citizenship.

“I don't feel myself to be Italian. But more South Tyrolean, a European, if you prefer, just with an Italian passport. I think a second passport would be really good,” she says.