German modal particles are one of the trickiest linguistic components for learners of the language to master. Learn the German of everyday speech, which most classes don't teach.

What makes them problematic is that there is not normally a direct translation for a specific particle, so they can be conceptually difficult to grasp.

Modal particles are words which convey the attitudes and opinions of the speaker. Although they do not change the essential meaning of the sentence, they strengthen the speaker’s message; modal particles are dispensable and serve to contextualize a statement. They are largely used in colloquial spoken language, so you’re unlikely to come across them in formal, written texts.

Doch is often used to intensify statements, both affirmatively and negatively. It roughly translates as ‘but’ or ‘after all’, as it conveys the notion of opposition, contradiction, surprise, and emphasis.

I have time tomorrow (although I initially thought that I wouldn’t).

Did you not bring the treasure? Yes, I did, it’s in my rucksack (although you thought I didn’t).

She’s not coming to the party after all (although I thought she would).

Doch can also be used as a means of seeking affirmation, as if you’re waiting for a positive response, or want the other person to share your view.

We can go to the cinema on Wednesday (we can do that, can’t we?).

Football is so boring (isn’t it?)

It really would be a shame if there was no more space (wouldn’t it?).

When employed as a modal particle, halt implies a sense of resignation or indifference, often to something which is generally known or accepted. It is often used to indicate that something is the way it is, and not a lot can be done about it.

Why did you drink my bottle of water? I was thirsty (what can I say?).

There are just so many people who live without love (but what can be done?).

A video from the YouTube Channel ‘Easy German’ breaks down a few favourite German particles.

Ja also serves to emphasize a statement and seeks to elicit agreement. In contrast to doch, in which the speaker tries to convince the listener of their point of view, ja implies that the speaker and listener share an opinion.

In some cases, it emphasizes an idea which is very clear to the speaker, and which the speaker thinks should be obvious to the other person. In this instance, it can be translated similarly to ‘obviously’ or ‘as you know’.

Of course, I have time tomorrow.

Today we are staying at home (it’s raining outside, you’ve broken your leg, your partner is ill, and there is no reason to leave the house).

There are lots of immigrants in Germany (as you know).

But ja can also be used to express surprise or amazement.

Your son has grown so big! (I haven’t seen him in ages and didn’t realize how much he’d grown up).

Mal serves to soften statements by making the speaker seem friendlier and more interested. It can make commands and requests sound more casual and politer, a little like English words such as ‘quickly’ or ‘just’.

Can you pass me the book (just real quick)?

Just try your dad’s cooking, it won’t kill you.

Wohl can be roughly translated as ‘probably’ or ‘possibly’ and suggests probability or certainty from the speaker’s perspective.

The father is probably absent because I’ve never seen him.

The moment of truth will probably come in the second half of the story.

Wohl can be used in a similar way to the English construction ‘must + infinitive), which helps to convey a sense of assumption or certainty on behalf of the speaker.

They must have already become pharmacists.

The dog must not have an owner. 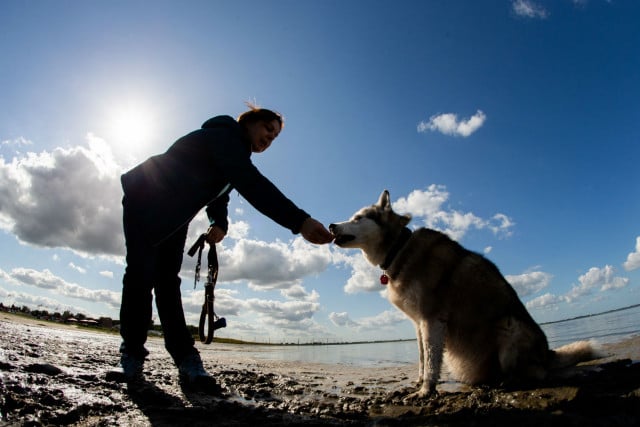 A dog and its owner in Lower Saxony in September. Photo: DPA

Wohl can help to contradict a previous point, similar to doch. In this instance, it can be translated as ‘of course’, or a stressed ‘do’.

I do know the man you are speaking to.

Did you check the security measures? We lost four documents.

Yes, we did check them thoroughly. They must have been stolen.

Denn is employed in questions to make them appear more casual or convey subtle interest, surprise or reservation.

Do you like Italian food? (I’d love to take you out somewhere and I’m thinking about where to take you).

What’s the problem then?

So how big is she?