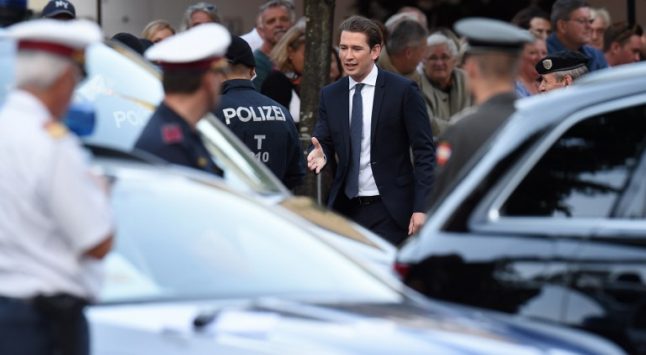 Sebastian Kurz arrives at the Felsenreitschule prior to an informal dinner as part of the EU Informal Summit of Heads of State or Government in Salzburg on September 19th. Photo: AFP

EU Commission chief Jean-Claude Juncker “has put forward a proposal to widen the mandate of the Frontex (border agency) and make repatriations (of refugees) more effective,” Kurz said in an interview with the Austrian daily Der Standard.

“Some member states are still rather sceptical. It's our task to convince them,” said Kurz, whose country currently holds the European Union's rotating presidency.

And speaking to reporters ahead of the meeting in Salzburg, Orban insisted that Hungary was “able to protect our own border. We insist on the right that it is our job.”

In the newspaper interview, Kurz said that Italy, Spain and Greece, as key entry points into the bloc for many refugees fleeing across the Mediterranean, were similarly  sceptical about the plans to beef up the Frontex border agency.

“It's about their sovereignty rights, as well as concerns about the improved registration of migrants,” the Austrian leader said.

Under the EU Commission's proposals, the number of Frontex border guards will be increased to 10,000 by 2020 and they will be able to intervene to better regulate the influx.

Germany and France in particular advocate improving the system for registering migrants.

Speaking to reporters in Salzburg, Kurz noted that Hungary had shown a willingness to clamp down on illegal migration, while others which had not been as tough.

“It's important to see how (Frontex's) mandate will be defined, in particular for those who appear capable of defending their borders,” Kurz said.

Noting that the number of people entering Europe illegally had dropped dramatically since the 2015 migration crisis, Tusk said that “instead of taking political advantage of the situation, we should focus on what works and just get on with it”.

“We can no longer be divided between those who want to solve the problem of illegal migrant flows and those who want to use it for political gain,” Tusk added, alluding to the anti-immigration parties that made gains in several recent European elections.