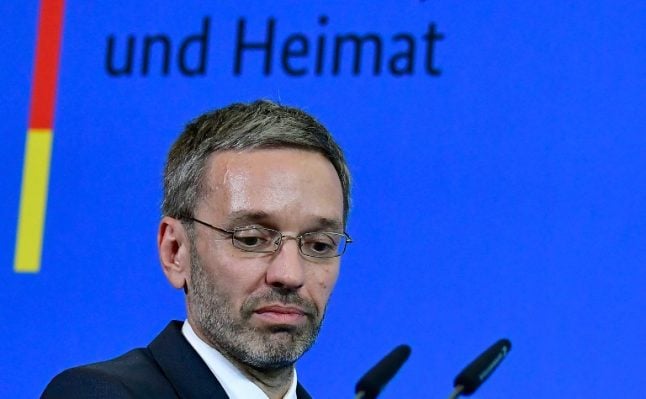 Austrian Interior Minister Herbert Kickl. Photo: Tobias SCHWARZ / AFP
Interior Minister Herbert Kickl of the far-right Freedom Party (FPÖ) told parliament that Austria had to explain itself or else face suspension from the so-called Bern Club, an intelligence sharing forum with members including EU states.
“Cooperation between partner services is based on trust. Trust building measurements were necessary… I was informed on June 26, 2018, that a suspension would be the last consequence,” he said, without giving further details.
He made the statement during a special session called by the opposition to urge his resignation which was rejected as it did not receive majority support.
Kickl's statement comes amid reports that Western secret services are increasingly wary of sharing information with their EU ally over concerns it could be passed to Moscow.
Officially, the February raids of offices and homes of officials of the BVT intelligence agency related to an investigation into allegations of abuse of office. But unusually, the searches were carried out by a police street crime unit run by an official from the FPÖ, which has a “cooperation pact” with President Vladimir Putin's United Russia party.
Files seized reportedly related to investigations into far-right extremist groups.
The opposition has accused Kickl of endangering the country by jeopardising its relationship with other secret services.
“It's just a question of time when he has to step down…. This is about our constitution and our security,” opposition parliamentarian Peter Pilz told parliament.
Kickl reiterated that based on “numerous conversations across different levels”, cooperation with international partners continued to function, accusing the opposition of playing up the affair to score political points.
Last week, a Vienna court declared some of the raids illegal because prosecutors had failed to explore other avenues to obtain the evidence they were looking for.
A separate parliamentary enquiry, also called for by the opposition, on the raids started this week, hearing from those involved. Kickl is due to appear in front of the enquiry in November.
The FPÖ has governed in a coalition since late last year. FPÖ leader Vice Chancellor Heinz-Christian Strache on Friday defended Kickl as an “excellent interior minister”.
Last month, Austria's FPÖ-backed foreign minister raised eyebrows by inviting Putin to her wedding. Images of the two of them dancing circulated widely.