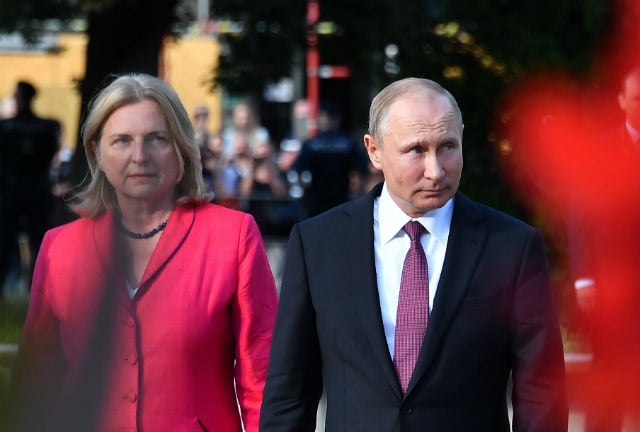 Russian President Vladimir Putin and Austrian Foreign Minister Karin Kneissl at a wreath laying in June. Photo: Joe Klamar / AFP
“How is Austria's presidency of the EU meant to live up to the government's own claims of building bridges (between the EU and Russia) and being an honest broker, when Austria's foreign minister and chancellor are so obviously on one side?” asked MP Andreas Schieder of the opposition Social Democrats (SPOe).
SPOe MEP Evelyn Regner said the invite sent a “shameful” image of Austria to its EU partners, branding it “a provocation of European proportions”.
The Greens called for Kneissl's resignation, pointing out that “Vladimir Putin is the EU's most aggressive enemy in matters of foreign policy”.
Kneissl, 53, who was nominated for the post by the far-right Freedom Party (FPOe), will marry businessman Wolfgang Meilinger in a ceremony in a wine-growing village near the southeastern city of Graz.
Putin confirmed he would be attending the wedding before heading to talks with German Chancellor Angela Merkel near Berlin on Saturday evening.  Putin's attendance was originally described as a “private event” by Kneissl's office but has since been upgraded to a “working visit”.
Several hundred police officers will take part in the security operation around the wedding.
Austrian Chancellor Sebastian Kurz of the centre-right People's Party (OeVP) and FPOe Vice-Chancellor Heinz-Christian Strache are also expected at the ceremony.
In 2016, the FPOe signed a “cooperation pact” with Putin's United Russia party.
The invitation to Putin has angered Kiev, which said it would prevent Austria playing a role in the Minsk agreements aimed at ending the conflict in eastern Ukraine.
The foreign ministry has insisted that Putin's visit “will not change anything in terms of Austria's foreign policy positions”.
The invitation has even provoked some criticism from within Kurz's own OeVP party, with one of its MEPs Othmar Karas saying: “I can't grasp the logic and the purpose of making such a personal occasion political and open to misuse in this way”.
Russia has been accused of seeking to weaken and divide the EU, notably by maintaining links with populist parties in several European countries.
Kurz's OeVP and the FPOe have been in coalition together since December after an election campaign in which both parties ran on anti-immigration platforms. 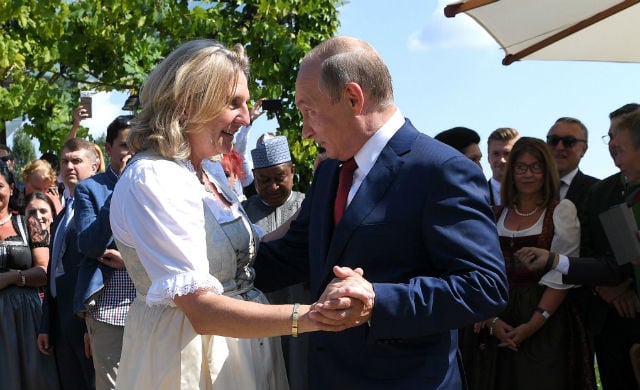 WEDDING
Putin dances with Austria’s Foreign Minister at her wedding 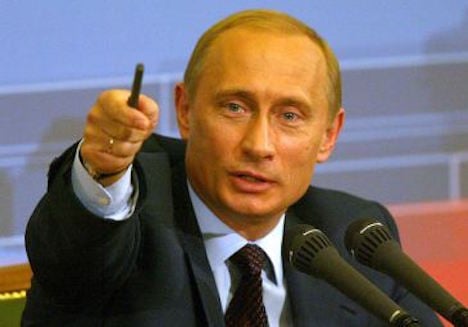