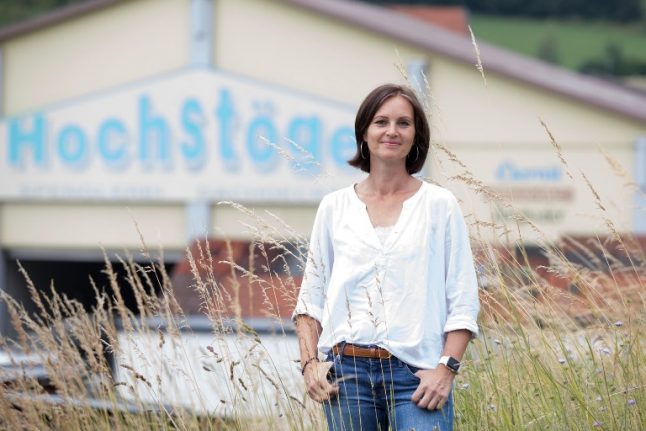 Sylvia Hochstoeger, co-CEO of a roofing company that employs an Afghan refugee as an apprentice, is fighting against an "absurd" situation. Photo: ALEX HALADA / AFP
But it was the threat of expulsion hanging over Shafi, an Afghan apprentice training at her business, which forced her to fight against an “absurd” situation.
“They tell you that integration is the most important thing, that you have to show that you're integrated. Shafi's done that. He's learnt German, he's found a job and he's developed a good social setting,” she explains calmly.
With her husband, Hochstoeger runs a zinc roofing business in Pabneukirchen about 150 kilometres west of Vienna.
Shafi, 23, was recruited as an apprentice in 2016 while he waited for his asylum claim to be processed. But a few months ago, his request was turned down so he filed an appeal and is now anxiously awaiting the outcome. And he's not alone. Afghan refugee Shafi works at a machine as a roofer apprentice. Photo: ALEX HALADA / AFP
Around a third of the 850 candidates for asylum who are currently in training are facing the same threat, says Rudi Anschober, an MP handling integration issues in Upper Austria who has taken up the case on behalf of the businesses involved and their trainees.
In a country lacking manpower in many sectors, “we have to take a long-term view on asylum-seekers. In this sense, apprenticeships are ideal, everyone's a winner,” says Anschober, a member of the Green Party.
Shortage of apprentices
But in Austria, the political discourse on migrants has hardened significantly since December when Sebastian Kurz took over as chancellor at the head of a coalition grouping his centre-right People's Party (OeVP) with the far-right Freedom Party (FPOe).
Under Interior Minister Herbert Kickl, an FPOe hardliner, the expulsion of rejected asylum-seekers has become a priority, mainly targeting Afghans. The government is reducing aid for refugees, with various groups criticising the reduction in funding for different integration initiatives such as German lessons or professional coaching — all set up by Kurz when he
was in charge of foreign affairs and integration.
“It's not necessary to run after them with millions saying: 'please, please, integrate yourselves',” explained an FPOe spokesman recently.
Back in 2012, Austria passed a decree allowing businesses to recruit asylum-seekers as apprentices in sectors where there was a shortage of workers.
In Upper Austria alone, some 3,000 such placements remain unclaimed in a country where apprenticeships have always played a key role in the education system as young people increasingly shun a range of technical professions seen as unattractive.
90 percent success rate –
Without the three asylum-seekers working with her as apprentices, Maria Reitner says her restaurant would have “just shut down”.
Some, however, are calling for the introduction of a two-year work permit at the end of the training. A petition has collected more than 50,000 signatures.
“The current system is absurd,” says Hochstoeger. “We have invested a lot of energy in training Shafi who has worked with incredible motivation. With supervision and by dint of hard work he can now follow the theoretical part of his training too.”
“Ninety percent of apprenticeship trainees are successful,” said Rudi Anschober.
The country has registered more than 160,000 asylum requests since 2015 — representing two percent of the population — with arrivals declining as elsewhere in Europe for the last two years.
From villages to large cities, large sections of Austrian civil society, however, continue to mobilise to support newcomers. Monika Mayrhofer, a retiree, took in Bashar, a 20-year-old Afghan who has been doing an apprenticeship, nearly two years ago.
“Knowing Bashar changed the mind of one of his colleagues who wanted to vote FPOe. People just have to meet each other,” she said.