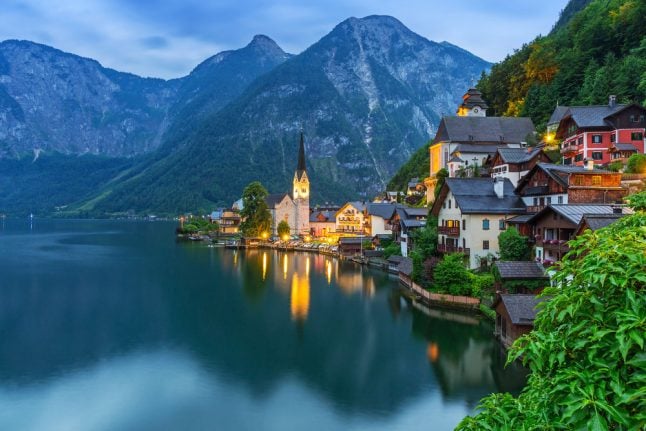 Hallstatt village, located on the shore of Lake Hallstatt in the Salzkammergut region. Photo: Depositphotos
Here are some facts about the landlocked and wealthy Alpine country of 8.75 million people, a member of the European Union since 1995 but outside the Nato military alliance.
1. Happy 100th birthday
Modern Austria was born in 1918 from the ruins of World War I and the Austro-Hungarian empire, reduced to a small rump of what was once a vast empire.
Violence between far-right and left-wing radicals marked the interwar period.
Adolf Hitler annexed his native country into the Third Reich in 1938.
2. Viennese whirl
A fifth of the population lives in the capital Vienna, a city that regularly scores highly in global surveys for quality of life with its rich culture and impressive architecture.
One in two Viennese was either born abroad or has a foreign-born parent and the population of the city — home to myriad international organisations — is growing fast.
3. Hills were alive
Vienna is a byword for classical music, home at one time to Mozart, Beethoven and Schubert. It was a cultural and intellectual hub in the late 19th and early 20th century.
Austria's more recent stars have included “Rock me Amadeus” singer Falco, techno twins Kruder and Dorfmeister and bearded lady Conchita Wurst, 2014 Eurovision Song Contest winner.
But few Austrians have seen “The Sound of Music”, the 1965 musical film with Julie Andrews cavorting in Alpine meadows that still proves a huge tourist draw for Salzburg.
4. Guns and gambling
European integration and the EU's expansion into Austria's eastern neighbourhood have been good for the heavily export-dependent economy. Until recently it had the lowest unemployment rate in the bloc.
The country is home to firms that may not be household names but are global titans, like Glock (guns), KTM (motorbikes), Novomatic (gaming machines) — and the better-known Red Bull (energy drinks).
This has helped Austria retain a generous social security system, although companies have long complained about excessive red tape, taxes and non-wage labour costs — all of which Kurz has vowed to slash.
5. Green giant
In 1978, Austria rejected nuclear power in a referendum, even though it had a plant ready to start.
It currently ranks badly when it comes to greenhouse gas emissions but plans to generate half of its energy through renewables within 15 years.
Some 20 percent of Austria's agricultural land is used for organic produce, making it a European leader in the sector.
6. Skiing downhill
Austria excels in winter sports. Sixty percent of the country is mountainous and when stars like ski racer and Olympic gold medallist Marcel Hirscher compete, Austrians are glued to their televisions to cheer them along.
But ski lessons for schoolchildren haven't been obligatory since the 1990s and the number of regular skiers has fallen from 60 percent to 40 percent of the population.
READ ALSO: Austria's right-wing 'rock star' Kurz takes the helm of EU politics
Url copied to clipboard!