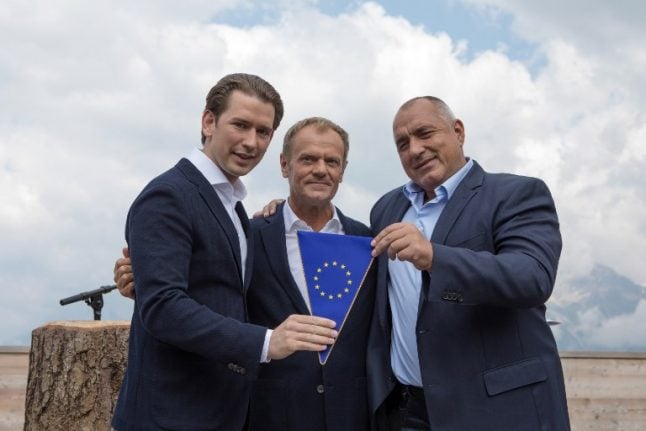 Chancellor Sebastian Kurz, European Council President Donald Tusk, and Bulgarian Prime Minister Boyko Borisov during a kick off event for the Austrian EU Presidency on Saturday. Photo: ALEX HALADA / A
“A Europe that protects” is the motto Vienna has chosen for its third period in the leadership role, which passes between different EU member states.
The presidency gives Austria the opportunity to chair meetings and set agendas as the bloc grapples with the continuing migrant influx, management of its borders and other issues such as Brexit.
READ ALSO: Austria's right-wing 'rock star' Kurz takes the helm of EU politics
As well as migration — which headed Austria's list of priorities even before the EU's summit on refugees this week — Chancellor Sebastian Kurz's government will have to oversee EU budget negotiations and make progress on the enlargement of the bloc through the Western Balkans nations.
However, achieving tangible results is expected to be difficult, in part owing to the start of campaigning for European elections in May 2019, and also because of the stalling Brexit negotiations with Britain ahead of its departure in March 2019.
Migration
Europe has been plunged into a political crisis in recent weeks after Italy and Malta both refused to allow a rescue ship carrying hundreds of migrants to dock. Spain eventually offered it safe port.
Kurz's government, in alliance with the far-right party FPO, is tough on migration, calling for a more restrictive EU policy, including increased protection of the bloc's external borders.
The Austrian presidency calls for “security” first on its website, saying tighter borders help the “fight against illegal immigration”.
Reform to the so-called Dublin asylum regulations, which say migrants must be dealt with by the first country in which they arrive, is also causing tension between member states.
It is unlikely Austria will be able to resolve the standoff, as Vienna supports the Visegrad countries of Hungary, Poland, Czech Republic and Slovakia which reject Brussels' proposal to allocate asylum seekers in times of crisis.
EU budget
Another major challenge is progress on negotiations on the EU's long-term budget for the period from 2021 to 2027.
Kurz this week repeated his view it was “possible” to reach an agreement before the European Parliament elections. However, the negotiations are complicated by proposed cuts to the Common Agricultural Policy (CAP), the largest single area of EU spending and one dear to major farm producers France and Spain.
And it will also be the first time the budget will finance military capabilities and infrastructure to be used by armies, therefore giving financial means to a common defence policy.
Enlargement policy
Austria, because of its central position in Europe and its history, wants greater integration of its Western Balkan neighbours into the union.
“This region is part of Europe in terms of economic policy and security and has proved a reliable partner during the migration crisis,” Vienna said stressing the importance of “stability”.
On Tuesday, the EU agreed to open negotiations to join the bloc with Albania and the ex-Yugoslav republic of Macedonia starting in June next year, provided certain conditions are met.
Austria would have preferred the move to have happened under its presidency, but France and the Netherlands pushed it through.
Vienna intends to lend a hand to the countries as they move towards joining the bloc, as well as Serbia and Montenegro, who are less advanced in negotiations.
By AFP's Céline Le Prioux
Url copied to clipboard!