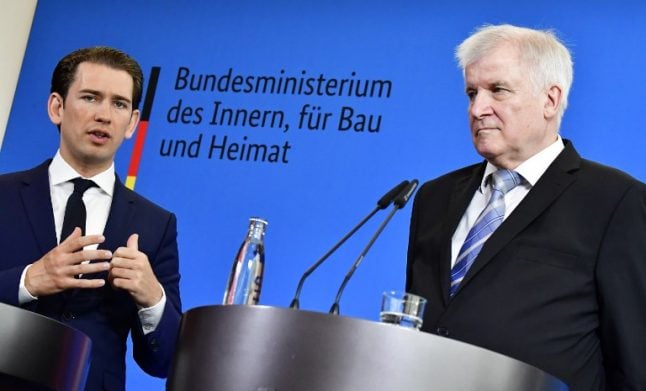 Kurz's comments came as he and his ministers held a special joint session in the Austrian city of Linz with their Bavarian counterparts from the German CSU party, which is currently locked in a battle over migration policy within  the government of Chancellor Angela Merkel in Berlin.

A row over migration policy in Germany between Merkel and her CSU interior minister Horst Seehofer has shaken the stability of the government in Berlin.

Kurz insisted he didn't want to take sides in an “internal German debate” but welcomed the fact that immigration was once again being discussed by EU leaders ahead of a summit later this month.

Without naming Merkel he also aimed a shot across her bows by making clear what he thought were the results of her decision to welcome refugees to Germany in 2015.

Kurz, who hails from the centre-right People's Party (ÖVP) went into coalition with the far-right Freedom Party (FPÖ) after an election last year in which both parties made a clampdown on immigration a central theme.

Kurz was foreign minister under the previous government and often boasts of his actions to close the “Balkan route” for migrants in 2016.

The head of Bavaria's state government, Markus Söder, emphasised that Munich and Vienna “have a common conviction and position” on the issue.

Kurz has said he intends to make migration a key theme when Austria takes up the EU's rotating presidency at the beginning of July and has been busy seeking allies for his stance.

On Thursday Kurz will go to Budapest to attend a meeting of leaders from the four central European Visegrad states — Hungary, Poland, Slovakia and the Czech Republic — who have traditionally supported hardline policies on migration.