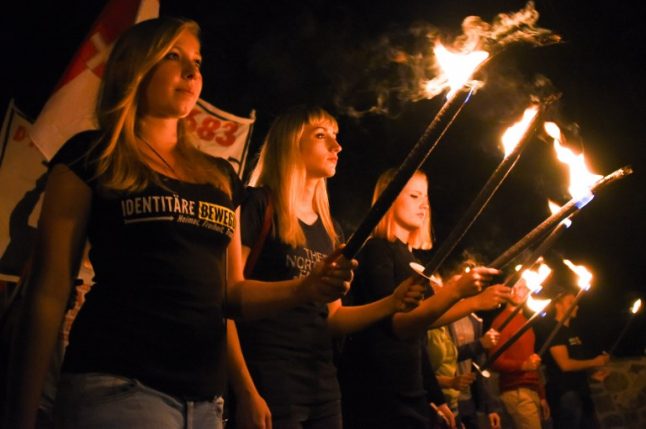 Some 250 members of the far-right Identitarian movement attend a rally in Vienna on September 09, 2017. Photo: AFP

The state prosecutor in the city of Graz said 10 prominent members of the group and seven other “active sympathisers” were being charged with various counts of hate speech, criminal association, damage to property and coercion.

The charges follow raids last month at the houses of several members of the group, including one of its leaders Martin Sellner.

The group has staged several stunts in recent years to publicise what prosectors called its “xenophobic ideology”.

One such event cited by prosecutors was an incident in March 2017 where members gained access to the roof of the Turkish embassy and hung a banner from it bearing the slogan: “Erdogan, take your Turks back home”.

Another example from June 2016 is mentioned in which members stormed the stage during a talk on refugee policy at Klagenfurt University and unrolled banners reading “Stop Immigration” and “Integration is a lie”.

Sellner, 29, was prevented from entering the UK in March, with authorities judging his presence would not have been “conducive to the public good”.

Last month he took part in an action near the French-Italian border in which far-right activists blocked a mountain pass in protest at the rise in migrants crossing the Alps.