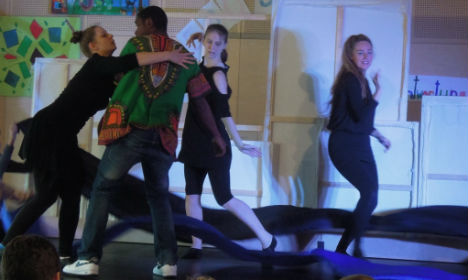 A scene from the play World in Flux when performed at Neue Mittal Schule in Zurndorf. Photo: Neue Mittal Schule
“Welt in Bewegung” (“World in Flux”) was commissioned by the Austrian interior ministry and is about two asylum-seekers: a Syrian called Nadim fleeing the civil war and Mojo “from Africa”, Austrian public radio reported.
“Economic migrant” Mojo is depicted as naively leaving his unnamed home country after seeing people smugglers' YouTube videos that suggested new arrivals in Europe get 6,000 euros ($7,400), a car and a house.
After his asylum request is rejected, Mojo falls into the clutches of Islamic State extremists. Police pick him up and he is deported. But there is a happy end as he starts a family and a business back in Africa.
Polite Nadim on the other hand is well-educated, can prove he is fleeing war, makes an effort to integrate into Austrian society and learns German. He is duly granted asylum.
Other characters include two racist older Austrian women, a quote-hungry journalist and a gullible “do-gooder” who offers yoga courses for refugees. Mojo is even into voodoo African magic.
The play has already been shown to between 7,000 and 10,000 children aged 11-17 in schools in Vienna and elsewhere, and the first public performance was due to take place at the capital's Weltmuseum in Friday night, the radio reports said.
But the venue's online programme showed the performance as having been “cancelled”. Radio station Oe1 reported that this was “in order have another look at the play and the background”.
The play's author Edmund Enge told Oe1 that the roughly 350 teachers who have seen the play gave “almost exclusively positive critique and reactions from all sides”.
However fellow public radio station FM4 quoted one unnamed teacher who had seen the play as saying it had “put in danger years of integration work”, as well as director Tina Leisch who called it “the stupidest propaganda”.
“What the play is about is what the ministry ordered. It's actually not a play, it's indoctrination supposed to result in thinking the right way,” said Gerhard Ruiss from the IG-Autoren writers' collective.
Interior ministry spokesman Alexander Marakovits responded by saying: “Things need to be simplified. Integration is a very complex issue… The message was broken down, and under professional supervision.”
“This is nothing to do with propaganda or something. This is just about conveying information,” Marakovits told Oe1.
Herbert Kickl from the far-right Freedom Party (FPOe), who has been interior minister since December, caused a stir in January by calling for asylum seekers to be “concentrated”.
But the play was commissioned by his predecessor from the centre-right People's Party, Wolfgang Sobotka.
Url copied to clipboard!