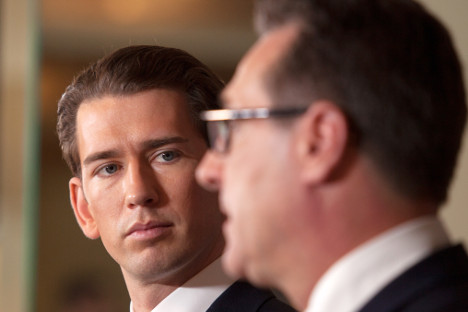 The landmark coalition deal, marking the return to power in Austria of the Freedom Party (FPOe), has sparked ripples of concern throughout Europe after a year of successes for far-right movements in Europe.

The chancellor-elect, Sebastian Kurz of the conservative People's Party (OeVP), already has a deeply-fractious relationship with Ankara due to his staunch opposition to Turkey's EU bid while serving as foreign minister.

“This baseless and short-sighted statement in the new Austrian government's programme unfortunately confirms concerns about a political trend based on discrimination and marginalisation,” the Turkish foreign ministry said in a statement.

Accusing the incoming government of “dishonesty”, it warned that if realised, the programme would bring Austria “to the brink of losing Turkey's friendship” and be met with “the reaction that it deserves”.

Turkey's decades-long ambition to join the EU has hit the buffers in recent months as the bloc sounded the alarm over the crackdown that followed the 2016 coup bid aimed at ousting President Recep Tayyip Erdogan.

While Austria has called for the accession process to be formally halted, this has met with opposition from key EU members, notably Germany.

But last month, the EU cut funds destined to Turkey in the 2018 budget, citing doubts about Ankara's commitment to democracy and human rights in a move supported by German Chancellor Angela Merkel.