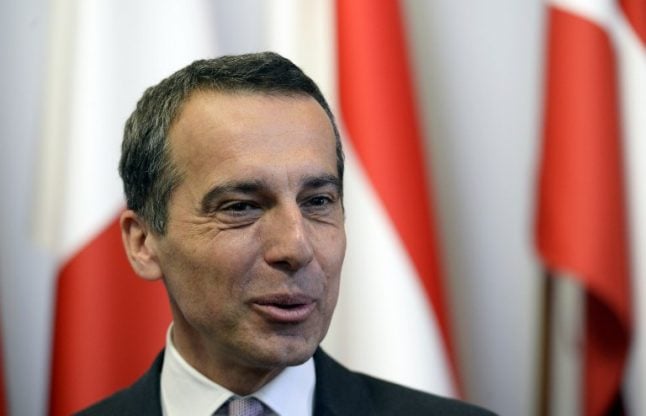 Austrian Prime Minister Christian Kern speaks to journalists before leaving the European Council, in Brussels, following the EU leaders summit last month. PHOTO: THIERRY CHARLIER / AFP
“I am convinced that we have a good chance of winning a majority in this election,” Kern told the Austria Press Agency (APA) in an interview published on Sunday.
“My election aim is to keep governing and to make sure that the Austrian dream of children being better off than their parents continues to be fulfilled,” the 51-year-old said.
Kern's Social Democrats (SPOe) have not won a majority for several decades and surveys suggest that the party will garner between a quarter and a third of votes in October.
Narrowly ahead of the second-placed SPOe in the polls are the centre-right People's Party (OeVP) under youthful new leader Sebastian Kurz, who turns 31 next month.
Not far behind in third place are the populist anti-immigration Freedom Party (FPOe), whose candidate came close in 2016 to being elected to the largely ceremonial post of president.
Kern also outlined to APA plans to slash taxes and social security contributions for individuals and firms by more than five billion euros ($5.7 billion).
He said he wants to finance this with a “significantly higher burden for global companies like Starbucks”, higher inheritance taxes and root-and-branch bureaucracy reforms.
The snap elections were called after Kurz took over the reins of the OeVP in May and pulled the plug on the party's unhappy “grand coalition” with Kern's SPOe.
The outcome could be the FPOe entering government. The last time this happened was in 2000 when the party was led by the flamboyant but controversial Joerg Haider.
This prompted an outcry in Israel and Europe — with even temporary EU sanctions — that someone who could praise Hitler's “orderly” employment policies could be in office.
Url copied to clipboard!