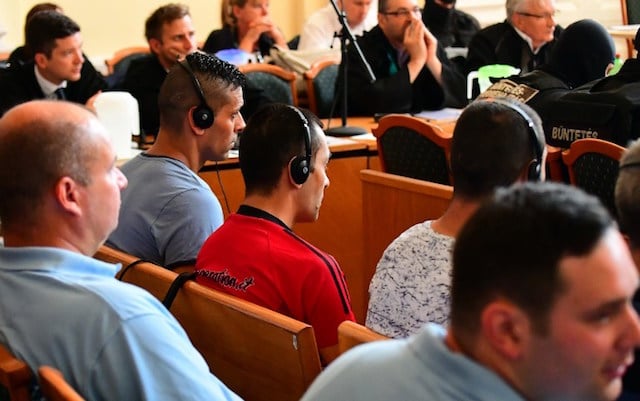 The defendants accused of human trafficking and torture wearing headphones to listen to the translation of their trial. Photo: Attila Kisbenedek/AFP
“I will only speak once I've heard what my associates have had to say,” 30-year-old Afghan Samsoor L. told the court in the Hungarian town of Kecskemet.
He added however: “I know what is true (in the charge sheet) and what is false. Some parts are correct, others are false.”
The discovery on a baking-hot day in August 2015 of the decomposing bodies — giving off a noxious stench — in the back of a refrigerated poultry lorry sparked international revulsion.
The trial is being held in Hungary because 59 men, eight women and four children including a baby girl suffocated in Hungary soon after being picked up near the Serbian border.
Samsoor L. and three suspected accomplices have been charged with murder “with particular cruelty”, while another seven suspects are accused of human trafficking and torture.
The group is believed to have transported more than 1,100 people to Austria and Germany at the height of Europe's migrant crisis two years ago, netting at least 300,000 euros ($335,000).
READ ALSO: Austria ready for 100km border fence with Hungary
Samsoor L. has rejected the charges against him, telling police after his arrest that he was a simple car salesman.
On the opening day of the trial, flashing a smile, he held up a sign in Pashto language reading: “I am neither a killer, nor an oppressor”.
'Greedy'
The Afghan's alleged right-hand man, a 31-year-old Bulgarian named as Metodi G., also refused to respond to the charges on Thursday.
But a statement he gave at the time of his arrest was read out in court in which he admitted acquiring vehicles and drivers on Samsoor L.'s orders, making clear that he was running the show.
“Samsoor was the boss of the whole operation. At first everything went well but he got more and more greedy and wanted to transport more and more people,” the statement quoted him as saying.
However he insisted the migrants' deaths had been an accident and said that at one point the truck had pulled over into a rest area in order to open the doors and give the migrants some fresh air.
“But a police car came and the driver panicked and took off without opening the lorry,” the Bulgarian told police.
“Nobody wanted that these migrants die… If I thought I was responsible I'd kill myself.”
READ ALSO: Austria's social system 'unaffordable without migration'
Almost 60,000 pages of evidence detail how the 71 migrants — all from Syria, Iraq and Afghanistan — were allegedly locked inside the airtight poultry truck at the Serbian-Hungarian border.
Half an hour after the departure, they started to bang and shout that they were running out of air but Samsoor L. ordered the driver to ignore their screams, transcripts of intercepted mobile phone conversations suggest.
“If they die… drop them off in a forest in Germany,” he was quoted as saying in the conversations recorded by Hungarian police but only listened to later.
The trial is expected to continue for several months, with a verdict expected at the end of the year at the earliest.