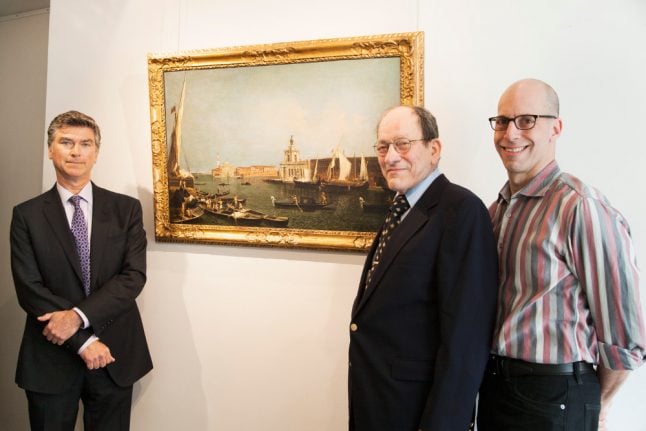 They hung it in their Vienna apartment as part of their private collection, where it stayed until Nazi Germany annexed Austria in 1938, Art Recovery International and London auction house Sotheby’s said on Sunday.

Heinz was ousted from his job and the family decided to flee the threat of the Nazi regime, placing their valuable possessions in storage, in the hope of retrieving them again once they found a new home.

The Grafs first went to Italy, then France where Heinz was interned at a Camp Gurs, where German Jewish refugees were held as “enemy aliens”. Anny too was briefly interned before the family managed to gain visas to the United States. They eventually made it to New York in 1941.

But in their attempt to recover their belongings, the Grafs discovered that the Nazis had seized their possessions, including the Marieschi painting, and sold them at auction.

Years of searching came to no avail and both Heinz and Anny died without seeing the paintings again.

Even after Heinz and Anny died, their twin daughters Eva and Erika continued the search, posting an advertisement in The Art Newspaper in 1998 with the help of the Art Loss Register, according to The New York Times.

An art dealer who had worked at Christie’s auction house recognized the painting and the sisters successfully asked a British judge to issue an injunction against Christie’s to release the name of the owner to the family. But when they contacted the owner, he refused to talk.

After the owner died in 2013, the artwork was placed in the hands of a trust, which in 2015 contacted Art Recovery International to mediate the situation with the Grafs.

Ultimately the trust and the Grafs reached a restitution agreement in December, though the Grafs’ son-in-law said this was not ideal.

“Our preferred solution would have been to get the painting back for my parents-in-law during their lifetime, or failing that, to their heirs,” Stephen Tauber, who was married to Erika until she died, told The New York Times.

“We brokered a compromise, which we signed. It is not really satisfactory, but it is acceptable. It was the best that we could achieve. Ideally, it would have been returned in total to our family. That wasn’t possible, so we settled for what we could get.”

In a statement, Art Recovery International founder Christopher Marinello praised both sides for finding a solution together.

“I commend the parties involved in this decades-old dispute in reaching an amicable accord. I strongly encourage collectors, dealers, and institutions to bring known or suspected Nazi-looted works out from the shadows and resolve these disputes discreetly without the need for costly and embarrassing litigation,” Marinello said.

“Facing these issues head on takes courage and, in some cases, sacrifice on the part of a good acquirer. However, leaving these issues for the next generation to deal with is never the answer.”

Heinz and Anny’s grandson, Andrew Tauber, was able to view the Marieschi work with his father for an hour last month.

“Finally, finally, after decades of hearing about this painting, I was getting to see it with my own eyes,” Andrew Tauber said. “Knowing that my grandparents, with whom I was very close, loved this work so much, it was a very emotional experience.”