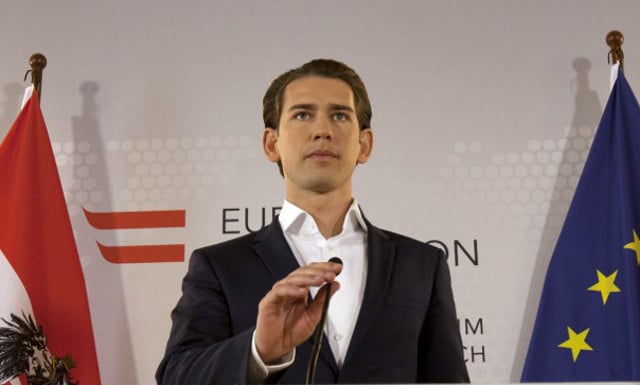 Sebastian Kurz gives a press statement about the need for an election in Austria. Photo: AFP

If Kurz's party pulled out of the government, the snap parliamentary elections that might result could herald the return to power of the far-right Freedom Party (FPÖ), which is riding high in opinion polls.

“I think early elections are the right way,” Kurz said.

“There's an offer on the table for me to continue in the current government, swap a few heads and act as if nothing had happened,” he told a press conference in Vienna.

“But I think we'd end up in the same situation we've been stuck in for a long time. Small compromises would be struck which wouldn't lead to any changes.”

Deep rifts have been plaguing the “grand coalition” between the ÖVP and the Social Democrats (SPÖ) led by Chancellor Christian Kern, spurring speculation that the unhappy union will dissolve long before the next
scheduled vote in autumn 2018.

Kern denounced Kurz's call for snap polls and said he would seek out partners for a minority government if the ÖVP quit the coalition.

“We don't want new elections, we will continue to find practical political solutions in the parliament — with minority parties if necessary,” Kern said on Friday.

Like other centrist factions in Europe, the SPÖ and ÖVP have suffered the wrath of disgruntled voters over rising unemployment and an influx of migrants.

The parties, which have dominated Austrian politics since 1945, were dealt a disastrous blow in the 2016 presidential ballot when both their candidates were booted out in the first round.

Austrian media have described the hugely popular Kurz as a “messiah” who could boost his party's dented image and help fend off the far right.

Recent opinion polls indicate that the ÖVP is lagging behind the SPÖ and the FPÖ, which are neck-and-neck. Analysts say Kurz's nomination could reshuffle the cards.

Either way, new elections are likely to raise the thorny prospect of a power-sharing cabinet that includes far-right leader Heinz-Christian Strache.

Back in 2000, more than 150,000 people marched in Vienna against the FPÖ — then headed by the SS-admiring Jörg Haider — after it entered a coalition with the ÖVP.

But observers note that the far right's return may not trigger the same backlash now, with populist parties gaining ground across the continent.

So far neither of Austria's main parties has openly excluded the possibility of governing alongside the FPÖ, which has welcomed Kurz's call for early elections.

Analysts say that a snap election could happen as early as September.

Kern, who became chancellor just a year ago, has repeatedly insisted he does not want an early vote.

“I don't see a single problem that would be solved with snap elections,” he said on Thursday.