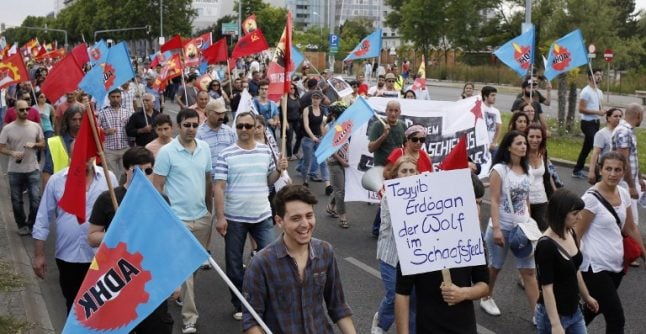 Turkish activists in Vienna hold a sign calling President Erdogan a wolf in sheep's clothing at a 2014 demo. Photo: AFP

“Recently there have been sporadic cases of Austrian citizens being temporarily arrested, held up as well as rejected on arrival (in Turkey),” according to the warning on the Austrian foreign ministry website.

The travel advice, updated on Wednesday, does not explicitly mention Austria's 360,000-strong Turkish minority, most of whom have Austrian citizenship.

However it follows a purge in Turkey of suspected opponents of Erdogan in the wake of last July's failed coup attempt.

According to prominent opposition Austrian lawmaker Peter Pilz, there are at least 10 recent cases of Austrian passport-holders being held on arrival in Turkey for up to 72 hours.

Pilz alleged earlier this month that they had been denounced to the Turkish authorities by the “Erdogan-Stasi” in Austria, a reference to the Stasi secret police in communist East Germany.

Elsewhere in Europe, German and Swiss prosecutors have in the past week opened enquiries into claims of spying on their Turkish minorities.

In February German police raided the homes of four Turkish Muslim preachers suspected of reporting on Turkish followers of US-based Islamic preacher Fethullah Gulen, whom Erdogan accuses of having orchestrated the coup.

The four imams reportedly belong to DITIB, an organisation controlled by Ankara that manages some 900 mosques or religious communities in Germany.

In Austria, the interior ministry said in February it was looking into charges that its DITIB counterpart ATIB was “involved in the surveillance of supporters of the Gulen movement as well as Kurds, opponents and journalists”.