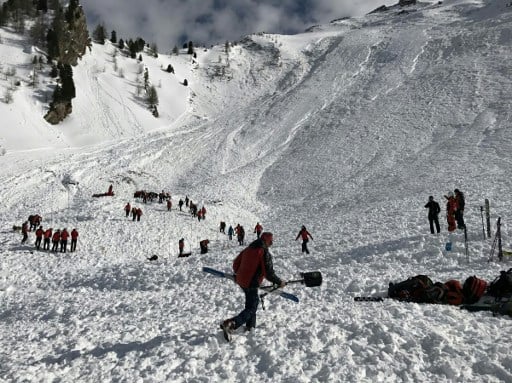 Photo: Zeitungsfoto.at/APA/AFP
The Innsbruck public prosecutor has opened criminal proceedings against the guide, a spokesperson told Austrian news agency APA.
Four people died when the 700m long avalanche struck the group of eight on the Jochgrub mountain above Schmirn in the Tyrol on March 15th.
Four others, including the Swiss guide, survived and raised the alarm.
However the victims were covered by a huge wall of snow. It took five hours to find the body of one victim since he was buried 12 metres deep.

The victims were buried deep in the snow. Photo: Zeitungsfoto.at/APA/AFP
At the time the head of the Tyrol avalanche service Rudi Mair said it was likely the group had triggered the avalanche themselves.
Speaking to APA this week, he said the area in which the group were skiing was very steep and north-facing, meaning it was prone to avalanches. It was “not a good choice” for ski tourers, he said.
The victims, aged 52 to 75, were from the canton of Aargau and were on a week’s ski tour break in the Tyrol.