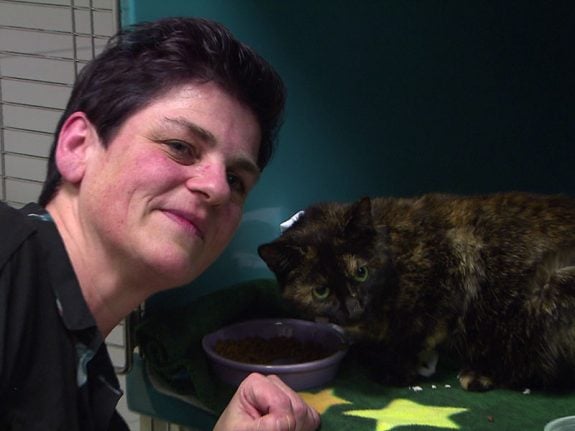 It’s thought that Pepper may have stowed away in a truck travelling from the Netherlands to Aschbach-Markt, west of Vienna.

Pepper, who was found emaciated and sick on the outskirts of a farm, has been cared for by a local vet.

Luckily Pepper had been microchipped, which enabled veterinarian Katharina Zöchling to trace owner Franka Schapendonk and send her photos.

Schapendonk flew to Austria on Sunday and said that she was “very happy to have found Pepper”, who she assumed had died. The story made international headlines, and Schapendonk’s journey to Austria has been sponsored by a Dutch insurance company.

Schapendonk bought Pepper’s favourite treats with her, and said that although her cat appeared shy and timid “she immediately recognized me” and allowed her to pick her up, without scratching or biting.

Vet Katharina Zöchling said that she was astonished to witness how Pepper behaved when she was reunited with her owner. “We did not expect it, because previously she really behaved like a wild cat.” She added that she’s delighted that Pepper is going home but that they would be sad to say goodbye as they had grown attached to the calico cat in the last few weeks.

Schapendonk is travelling back to her home in Tilburg with Pepper by train on Monday. It’s a 12 hour journey but Schapendonk says she has plenty of treats with her and hopes it goes well.

Pepper will have a new playmate when she gets home, as Schapendonk got a new cat when she gave up hope that Pepper would return. Let’s hope the two felines get along and Pepper doesn’t undertake anymore incredible journeys.