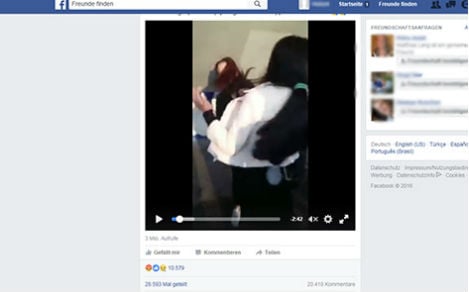 A still from the video which was shared on, and later removed from, Facebook.

They filmed the assault and shared the video on Facebook, where it went viral before being removed by the social media network.

A 16-year-old Austrian girl, identified as the leader of the gang and the victim’s former best friend, was sentenced to 18 months, six months of which must be served in prison. A 16-year-old Chechen boy received the same sentence.

Two other girls, aged 16 and 17, received 12 month sentences. A 21-year-old man, who punched the girl in the face and broke her jaw, was handed a two year sentence, eight months of which must be served behind bars. His younger brother was acquitted. The group have been ordered to complete anti-violence training and undergo psychotherapeutic treatment.

Child and youth attorney Monika Pinterits told the ORF broadcaster that locking the gang members away “is not enough”, and that they must also be taught to “feel compassion for others” again.

The attack left the victim, named as Patricia, with her jaw broken in two places, and she had to spend a week in hospital where a steel plate and screws were inserted into her jaw to fix it into place.

The 16-year-old gang leader, named as Leonie, told the judge that she had wanted to teach Patricia “a lesson”, after she pulled a Muslim woman’s headscarf off in the street.

The beating took place near the Kagran U-Bahn station in Vienna's Donaustadt district.

Leonie was arrested after the assault and released in time for Christmas. However, she was arrested again in January after making threats against other youngsters at a youth centre where she was housed.

The Chechen youth, who came to Austria as a refugee, was arrested last week after he posted death threats against the Foreign Minister Sebastian Kurz on social media.

Patricia was awarded damages of €3,960 for her pain and suffering.