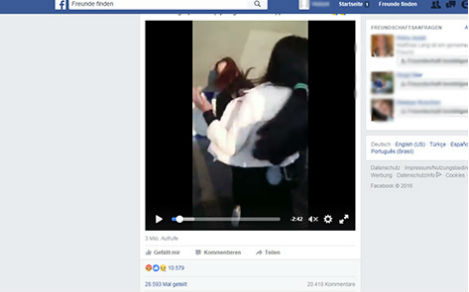 A still from the video which was shared on, and later removed from, Facebook.

The attack left the girl, named as Patricia, with her jaw broken in two places, and she had to spend a week in hospital where a steel plate and screws were inserted into her jaw to fix it into place.

She told police that the violence had been organised by one of the people in the gang after she stood up to one of the girls, who decided to teach her a lesson.

A court appointed medical expert will give evidence at the trial. In the video, the girl is seen being hit 22 times – but the final blow which broke her jaw was not on camera. A 21-year-old man is accused of breaking her jaw by punching her in the face.

The ringleaders of the gang are thought to be a 16-year-old Chechen boy and a 16-year-old girl from Lower Austria who is in social care.

The Chechen youth, who came to Austria as a refugee, was arrested last week after he posted death threats against the Foreign Minister Sebastian Kurz on social media.