Valentine’s Day in Austria: Everything you need to know

Here’s our A to Z guide to dating in Austria, just in time for Valentine’s Day.

A is for adhering to tradition Vienna native and blogger Barbara Cacao says that for Valentine’s Day “Austrian women expect flowers and chocolate at the very least.

"Ideally followed by a romantic dinner. Most male other-halves need years of training to meet their wives' or partners' expectations...but I think Austrian women are patient and persevere.”

B is for Bubbles. And in Austria that means Sekt for special dates. No beer.

C is for conservative. Many of our expat readers tell us it’s hard to get romantically involved with an Austrian - as they tend to be reserved and conservative.

One French reader, Valerie, told us Austrian men don't know the first thing about seduction, and she misses flirtation and men making eye contact with her on the street. So the onus might be on you to make the first move.

D is for dinner. Coffee just doesn’t cut it for a romantic date, especially on Valentine’s Day. If you’re in Vienna, and looking for something a little different than your usual restaurant, Barbara Cacao recommends the privacy of Mezzanin 7.

E is for early. Austrians are generally fans of punctuality - or Pünktlichkeit. It’s not the done thing to keep your date waiting.

F is for flesh. Winters are cold in Austria, and women tend not to reveal too much flesh on a date. Think sexy but mysterious, and a little conservative.

G is for gentleman. Once you have met an Austrian man, they tend to be chivalrous - taking your coat for you, and opening doors and so on. It’s usual that the guy will pay for romantic dinners and drinks, especially on Valentine’s Day. But take your purse, just in case.

H is for hard to get. Katia Farias, a Brazilian journalist and blogger who lives in Vienna warns that it may take some perseverance to snag an Austrian man as they are hopeless at flirting and tend to give off an “I’m not interested” signal.

This is where it can be handy to learn some German - Austrians often don’t want to look stupid and may be shy about speaking English - so learning a few cheesy chat-up lines like "Ich möchte dich nicht dumm anmachen, aber ich hätte nichts dagegen, wenn du es tust" could be a game changer.

I is for intimacy. Some of our readers tell us that despite that initial shyness Austrians are more willing than some more conservative cultures to move on from the kissing and the cuddling and into the bedroom. Sex on a first or second date will not be held against you, but that said, don’t get your hopes up.

J is for jewellery. A fail-safe option for a gift on Valentine’s day or any special occasion. And Austria has some great jewellery stores.

K is for Konditerei. Austrians are famed for their sweet tooth and fabulous cakes and pastries. Treat your sweetheart to Imperial cakes in the palatial yet intimate atmosphere of Gerstner’s Salon Privé.

M is for macho. Sadly, some Austrian men can be a bit “unreconstructed” and haven’t quite caught up with the notion of feminism.

If you find they’re expecting three hot meals a day and aren’t helping out with the household chores, it might be time to educate them - or move on.

N is for nudity. Austrians are very comfortable with nudity, as you’ll notice in the summer months if you stumble into an FKK (nude swimming) zone. And spa culture is big here. So why not get naked, hot, and steamy with a bunch of strangers in an Austrian sauna.

O is for the Orient Hotel. If your marriage or relationship needs spicing up you could consider a date at Vienna’s famous charge-by-the-hour hotel. It will give you the illusion that you’re doing something naughty and forbidden, as if you’re having an affair.

P is for Pampering. Take yourself and your love off to a thermal bath and treat yourself to a facial or massage. You deserve it, and Austria does spas really well. The Therme Wien has a range of Valentine’s day packages on offer.

Q is for quatschen. Learn the fine art of how to chatter in German, and you may end up charming the pants off your Austrian date with your adorable foreign accent. 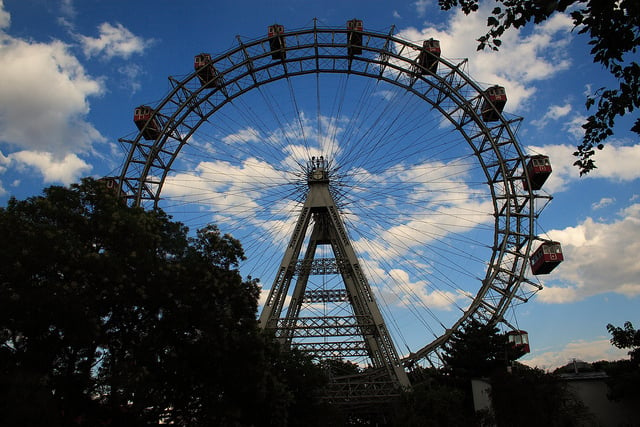 R is for Riesenrad. Take your sweetheart on a ride on Vienna’s famous Giant Ferris Wheel or even better - rent a cabin for a candlelight dinner.

S is for smoker. Be prepared for the fact that your Austrian date might smoke. Austria has a high rate of smokers, especially among younger women, and only two in five smokers have tried to quit the habit. Plus, there still isn’t a general smoking ban in restaurants and cafes.

T is for Tinder. If all else fails, and you’re feeling lonely, check out Tinder. Everyone else is.

U is for unfaithful. If you suspect he/she is being unfaithful, then he/she probably is. Cut your losses and move on. Even Emperor Franz Joseph I, a Catholic workaholic, was a notorious cheater.

V is for Valentine’s. Spending Valentine’s alone? Sick of the rampant commercialisation and schmaltz of February 14th? Why not check out the camp and alternative Anti Valentine’s Ball at Vienna’s WUK. This year’s ball is inspired by John Waters’ last film A Dirty Shame.

W is for waltzing. Most Austrians learn how to do this at school. Even if you don’t have tickets to a Viennese ball, get into ballroom dancing during a private waltz dance lesson in a Viennese palace.

X is for x-rated. Austrians aren’t shy about sex, despite it being a Catholic country. Brothels are legal here (but tightly regulated), and sex shops aren’t hidden in dark alleyways but tend to be clearly visible on shopping streets. So take your partner on a shopping spree for some naughty accessories.

Y is for young at heart. Shake off your winter blues and remember that having fun is one of the keys to a good relationship.

Z is for ZZZZ. Once you’ve met the man or woman of your dreams, relax and be happy. Whatever everybody says, living in Austria has lots of advantages.

This story was originally published on Valentine's Day, 2017.