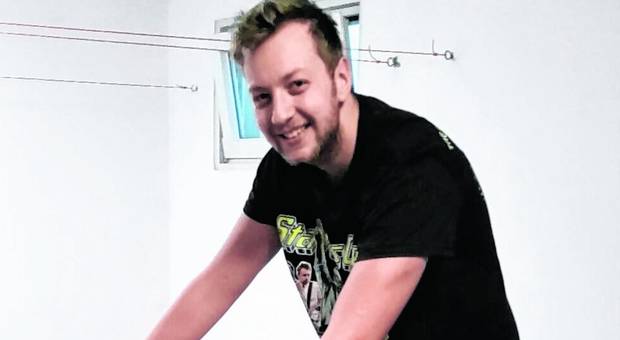 However, his employer didn’t find the stunt amusing and has since sacked him.

The man, named only as Raffael R., spoke to the Kurier newspaper the day after his naked bike ride in sub-freezing temperatures made headlines in the Austrian media. He works as a pastry chef in a four-star hotel in central Villach, and said that he wanted to impress the female night porter, who he has a crush on.

“I cycled to the hotel at 2am to chat to her. I’m actually rather shy, but I had two bottles of Coke with me and wanted to invite her for a drink,” he said. “However, she wouldn’t open the side door for me,” he added. In order to get her attention, he went into an underground car park next to the hotel and set off a fire alarm.

“I thought it would be funny if I took off all my clothes – climbed back on my bike and cycled in circles outside the hotel entrance. It wasn’t that cold – I found it refreshing,” the 25-year-old said. Temperatures in Villach that night were -13C. We can imagine that the night porter wasn't overly impressed.

He then attempted to cycle through the hotel’s revolving door, and failed miserably – managing to get stuck in it instead. It was at this point, he said, that he started to regret his prank: “I couldn’t free myself from this stupid situation.”

At this point a fire engine arrived in response to the fire alarm Raffael had set off. Firefighters were astonished to discover a naked cyclist was the culprit. “When we asked him what he thought he was doing, he abandoned his bike and ran off on foot,” local fire service chief Harry Geissler said. He was arrested shortly afterwards by police who found him in a bar in the city centre – still stark naked.

“We put him in our patrol car and drove with him back to the hotel but we could only find his underwear,” said Mario Nikischer from Villach police. After asking him to put his underpants on they called his mother and she brought some of his clothes to the police station. “That was really embarrassing,” Raffael admitted.

An alcohol test, contrary to previous reports, proved negative but Raffael refused to take a drugs test. Nikischer said he will be reported for “misuse of a fire alarm, offending public decency, and possibly other offences”. He said that it’s still unclear whether drugs were involved that night.

One immediate consequence was that the hotel promptly terminated Raffael’s employment. He’s now looking for a new job.