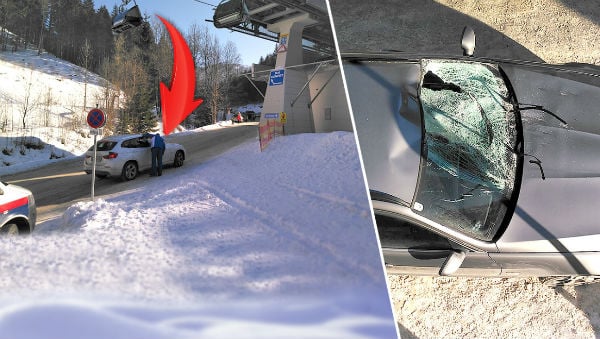 The Hungarian woman suffered fractured bones, and is being treated in intensive care.

It’s not clear why the 29-year-old woman, who was skiing with her husband, opened the safety bar on the chairlift after it had left the terminal. So far the woman has not been able to be questioned about the accident.

Witnesses were horrified when they saw the couple falling out of the lift. The man (39) landed in a safety net, but his wife crashed onto a car being driven by an Austrian man who was arriving at the resort for a day’s skiing. The impact of her body broke his car windscreen.

The driver, who doesn’t want to be named, told the Krone newspaper that the sound her body made as it dropped onto his car was “incredibly loud – I was terrified. Thousands of glass fragments were in my car, my hands were bleeding, who knows what could have happened!”

The man, who told the newspaper he often skis in the area, said that in his opinion the safety net should have stretched across the street. “Imagine a child fell out of the lift, or that the woman had landed on a pedestrian, or directly onto the street! Someone could have died – and I could have died too.”

The Hungarian woman was wearing a ski helmet when she fell, which probably helped to save her life.

Four people died over the weekend in Austria while skiing, snow-shoeing or sledding – an unusually high toll for winter sports related deaths in the country.

The Austria Press Agency reported that two Czech nationals snow-shoeing in Salzburg’s alpine region died on Sunday after being buried in an avalanche while two others managed to free themselves.

According to state broadcaster ORF the two other deaths occurred on Saturday. A German man was reportedly killed after he hit a rock head-first while sledding near the Swiss border, and an Austrian skier died after colliding with a snow-boarder on a slope near the Italian border. The snowboarder was only slightly hurt.