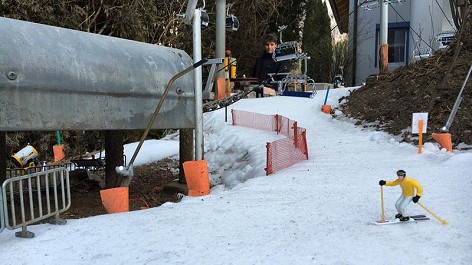 The miniature resort which 17-year-old Kevin Pobatschnig built in the garden of his parents' house in Radenthein in the state of Carinthia has two chair lifts, a gondola, and a T-bar lift.

The ski slopes, skiers and all the equipment were built on a 1:32 scale, and when there isn’t any snow Kevin makes his own using a homemade snow cannon. The ski slopes are around 15 metres long.

He says he had to design his own snow cannon due to Austria’s increasingly warm winters. “Last year, I could only open the resort for 30 days,” he told Austrian broadcaster ORF. He started working on the project when he was just ten years old – and he found many of his ideas and techniques online.

Kevin made all the parts himself – the chairs, the lifts, and even the skiers. He says he uses every spare minute to work on the project, and that it takes him between three and five hours to prepare the entire ski resort. He also maintains the slopes, cleans the buildings and invents new models.

His parents pay the electric bill, help with the landscaping and also give advice and technical help – although his mother says she doesn’t have much room left for growing flowers in the garden.

Kevin is working on some new designs in his parents’ basement. His next project is a double chair lift built on a 1:12 scale, and modelled on one at the Verditz ski resort. He wants to make the run at least 100 metres long, and is looking for a piece of free land to build on.