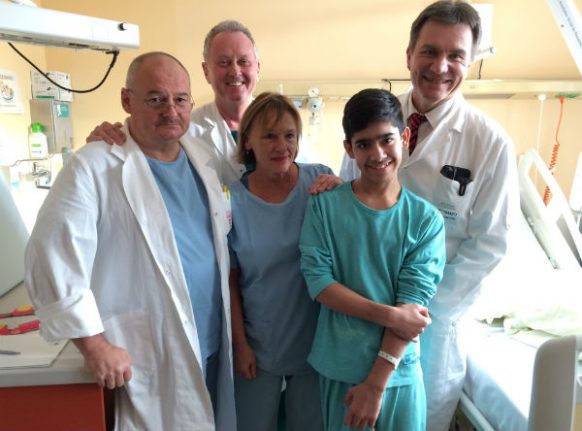 Morteza with doctors from the Donau hospital in Vienna. Photo: KAV/Mierau

Morteza was on a school swimming trip in Burgenland in the summer when he disappeared in the Neufelder Lake.

He sank to the bottom of the lake and it took 41 minutes before divers were able to find and recover his body. He was flown to a children's intensive care unit in Vienna and miraculously doctors were able to resuscitate him. He’s now in good health.

“None of us could believe that this child really spent 41 minutes under water, but all the protocols and witnesses confirmed that he had,” Alexander Rokitansky, head of pediatric surgery at Vienna’s Donau hospital said.

“We cooled his body temperature to 33 degrees and he was in a medically induced coma for a week,” Christian Scheibenpflug, senior doctor at the children's intensive care unit, said. He was woken from the coma very gradually and then spent five weeks in intensive care before being moved to a normal ward. A week later, he was taken to another hospital for neurological rehabilitation.

Doctors say he’s made a remarkable recovery and that his motor and cognitive abilities have been largely restored. People who have spent a long time underwater often suffer brain damage afterwards because of the lack of oxygen. Rokitansky said that it’s now well documented that people have a better chance of surviving a lack of oxygen when the body is cooled down, as it slows down the body's vital functions. “It was to the boy’s advantage that the Neufelder Lake has cold water,” he added.

Morteza was even able to start attending school at the end of summer. He and his parents arrived in Austria 14 months ago as refugees, and now live in Vienna. He’s reportedly a bright student and his favourite lessons are Maths and German. He’s also a big football fan and his idol is Cristiano Ronaldo.

While Morteza’s story is very unusual, it's not unheard of for people to survive prolonged stints underwater. Last year a teenager in Italy beat incredible odds when he survived after 42 minutes underwater, after falling into a canal in Milan.