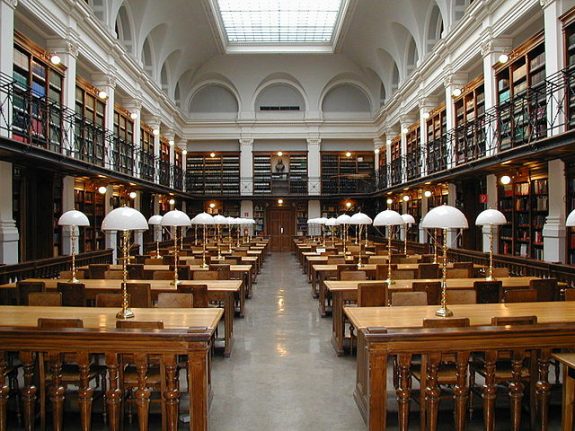 Graz University Library Reading Room Photo: Wikimedia/Dr. Marcus Gossler
The word describes the deferral of the second iteration of the presidential run-off election. The term is so packed, lengthy and complicated due to the unprecedented course of this particular election in the history of Austrian politics.
Up until its final conclusion this past Sunday, December 4th, Austrian citizens had no choice but to remain vigilantly aware that the position of the president was still undeclared due to complications arising from an initially unclear outcome between two candidates, a subsequent miscount of votes claimed by the far-right Freedom Party (FPÖ), and then the delay of the final vote, which occurred twice over.
According to the jury which settled on the word at the University of Graz's Research Center for Austrian German: “In terms of its content as well as its length, [the word] is a symbol and an ironic form of commentary for the political events of this year, [which was] characterized by the very long campaign for the presidential election, the challenges of the voting process, and its reiteration.”
Headed by Rudolf Muhr, the jury had the task of sifting through over 10,000 different suggestions. The word in second place was “Bundesheinzi”, or a marriage of the word for President (Bundespräsident) and sitting president, Heinz Fischer's endearing nickname, Heinzi. The word in third place is “arschknapp”. It is a word not simply translated without using an expletive, yet it comments perfectly on the election results, which were “bloody close”.
The so-called ugliest word of the year was declared to be “Öxit”, or the Austrian equivalent of Brexit. In second place was “Asylobergrenze”, or the term referring to a cap on refugees. The third taboo word of the year turned out to be “Wilkommensklatscher”; a somewhat derogatory term describing the philanthropic individuals that constitute the welcoming committees at train stations and airports, which wait to reign in the arrival of new refugees. The criticism that lies within this term would have to do with these people's general disregard for the trouble inherent in taking more asylum seekers into the country.
Overall, these words present an enlightening meditation on the events of the past year within Austria and provide food for thought as 2017 approaches.