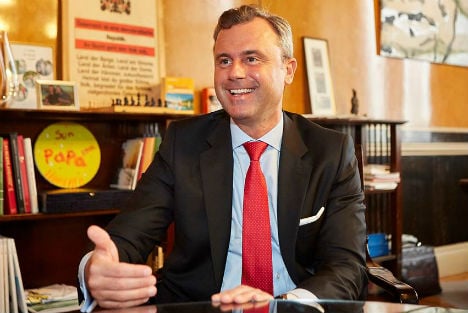 Van der Bellen won with about 53% of the votes – a projection, as postal ballots are still being counted.

But – as across much of Europe and in the US – voters in Austria were divided, there weren't many percentage points between the presidential candidates. Hofer won 46.7 percent of the vote in the best ever national result for his Freedom Party (FPÖ) after a bitter and polarising 11-month race.

Mainstream politicians across Europe may have breathed a sigh of relief at the outcome of Austria’s presidential election – but the issues Hofer campaigned on have not gone away. Like populists elsewhere, he stoked concerns about immigration and globalisation, vowing to “get rid of the dusty establishment” and fight “Brussels centralising power”.

“The idea of Austria's possible EU exit scared them and made them choose a candidate who is not from the establishment per se but mainstream and much more pro-European.” In his view, the election casts doubts on the “inevitability of the triumph of populism”.

Van der Bellen also appealed to voters to be wary of Hofer’s ‘Dr Jekyll and Mr Hyde’ character, warning that he couldn’t be trusted. Observers say that Freedom Party leader Heinz-Christian Strache’s talk of “civil war” breaking out in Austria due to mass migration may also have mobilised undecided voters to choose Van der Bellen.

'Our time is coming'

Admitting defeat, Hofer said it was a win for Austria's “political system”. He vowed to stand as an MP in the next elections and run again for the presidency — a largely ceremonial but highly coveted position — again in 2022.

“Yesterday we wrote history!”, said Strache, who has called German Chancellor Angela Merkel “the most dangerous woman in Europe” for her open-door refugees policy. “2017 will be the Freedom Party's year! Our time is coming!” he said on Facebook.

France’s Marine Le Pen, of the far-right National Front, congratulated Hofer for “fighting bravely” and said the FPÖ would win the next general elections, due in 2018 or quite possibly sooner.

Frauke Petry from the right-wing populist Alternative for Germany (AfD), which has won opposition seats in 10 of Germany's 16 states ahead of federal elections in 2017, said the same.

The prediction may not be wide of the mark, with the FPÖ currently leading opinion polls, stealing voters from the two centrist parties in Chancellor Christian Kern's unhappy “grand coalition”.

Carsten Nickels of the Teneo think-tank in Brussels said voters are “impatient with the political centre, which keeps explaining that the world 'out there' is complex and it requires time to find solutions.”

“In addition to the economic crisis, the migration crisis, terrorism, security threats have become focal points. It's led to a huge cultural and identity issue in politics,” he told AFP.

But citing the disarray in Britain following the Brexit vote and the broken promises of Finland's True Finns party, he said populists “make promises that are impossible to deliver on”.