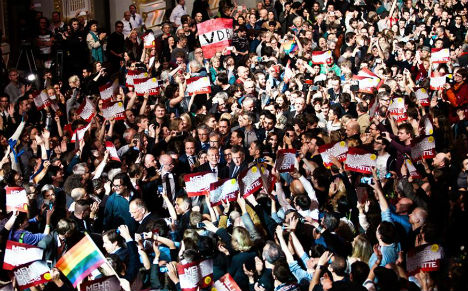 “Today it is not an exaggeration if I say that today we see a red-white-red — the flag of Austria — as a signal of hope and change. A red-white-red signal from Austria to all the capitals of the European Union,” Van der Bellen, 72, said in Vienna.

An official result, after the postal votes have been counted, is expected later on Monday. Van der Bellen will be sworn in as Austria's president on January 26th. He will be Europe's first president with links to the Green party.

The highest number of Van der Bellen voters were among women and urban voters.

Establishment politicians in Austria and Europe had been nervous about a possible Hofer victory in a year that has seen two monumental political upsets already: Donald Trump winning the US presidential election and Britain deciding to leave the EU.

Hofer, like Trump and “Brexit” proponents, had stoked concerns about immigration and globalisation, vowing to “get rid of the dusty establishment”, seek closer ties with Russia and fight against “Brussels centralising power”.

Following the arrival of a record number of migrants last year including many fleeing war in Syria, Hofer had also declared that Islam has “no place in Austria”, seeing Muslims as a danger to the country's values, traditions and security.

The role of the Austrian president is largely ceremonial, but there had been fears that a Hofer victory would embolden other anti-establishment forces ahead of elections next year in France, Germany and the Netherlands.

The relief across Europe was palpable on Sunday evening, with German Foreign Minister Frank-Walter Steinmeier calling the outcome a “good omen against populism in Europe”.

And at Van der Bellen's election party his supporters were pleasantly surprised, many having thought that Trump and Brexit would boost Hofer's chances and fearing voter fatigue. “It was all worth it. Later I think I might cry out of relief,” said social worker Christoph Krottmayer, 35.

At FPÖ headquarters there was deep disappointment that the “elite” had won yet again. Several people including Hofer's young daughter burst into tears after the results emerged.

“It's clear that nothing will change in Austria because with Van der Bellen the two main parties can continue without being challenged,” FPÖ lawmaker Johannes Huebner, 60, told AFP.

Many Hofer voters turned to the internet, where the FPÖ has a huge following, to vent their anger. “I am really thinking about leaving this country for good,” bemoaned Manfred Stadler on FPÖ leader Heinz-Christian Strache's Facebook page.

“I can predict that pretty soon we will be betrayed by the EU and overrun by radical refugees. I can't be bothered wasting my energy and my money,” Stadler said.

Marine Le Pen of France's far-right National Front, who visited Hofer earlier this year, congratulated him for “fighting bravely” and said the FPÖ would win the next general elections.

The prediction may not be wide of the mark, with the FPÖ currently leading opinion polls, stealing voters from the two centrist parties in Chancellor Christian Kern's unhappy “grand coalition”.

The two parties, which were forced to watch the presidential election from the sidelines after their candidates were knocked out in April's first round, may even throw in the towel before the government's term ends in late 2018.

But political analyst Peter Hajek, while expecting early elections, was not so sure the FPÖ would emerge triumphant. “Anything is possible. They might come first, or they might come third,” he told AFP.