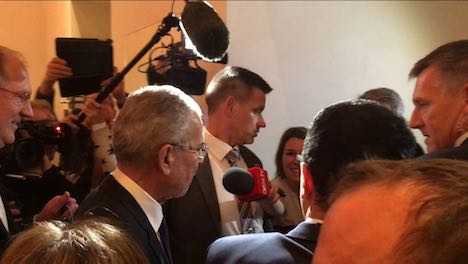 Polls closed at 17:00, but many postal votes remain to be counted.  Election officials have announced that a provisional result will be published at 7:30 p.m. CET (Vienna time.)

Austrian far-right candidate Norbert Hofer on Sunday congratulated his opponent in presidential elections after projections indicated that he had lost.

“I congratulate Alexander Van der Bellen on his success and call on all Austrians to stick together and work together,” Hofer said on Facebook, adding that he was “incredibly sad”, according to AFP.

FPÖ leader HC Strache said “I would have liked a different result”.  He congratulated the supporters of Norbert Hofer and thanked his candidate for a great election campaign.
He also congratulated Van der Bellen and promisee to respect the election result. “Of course this is disappointing for me now,” he added.
Strache ruled out launching a legal challenge against the defeat of the party's candidate Norbert Hofer in the presidential election.

“This time clearly there are no complaints… Today we can be sure that citizens' votes were properly handled,” Heinz-Christian Strache said on public television. In May the FPÖ successfully challenged Hofer's defeat and secured a re-run.
The election revealed deep rifts in Austrian society. Opinion polls from November showed the election was always too close to call, with the turnout on a cold December day likely being a deciding factor.

According to FPÖ general secretary Herbert Kickl, in the FPÖ election centre: “In the end, it didn't work out [as we hoped].”

He congratulated Alexander Van der Bellen on his success. This marks the official concession by the FPÖ.

Green CEO Eva Glawischnig is very pleased: “This is a historic day, an historical breakthrough,” she told APA.

According to analysts, the primary motivation for supporting Van der Bellen was that he was the best representative of Austria abroad.