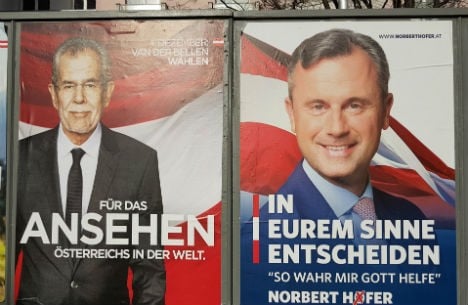 Norbert Hofer of the hardline Freedom Party (FPOe) hopes to emerge victorious after he narrowly lost to his Greens-backed rival Alexander Van der Bellen in a first run-off in May, which was annulled over ballot count breaches.

Boosted by Brexit and Donald Trump's shock US election win, smooth-tongued gun enthusiast Hofer has vowed to “get rid of the dusty establishment”, seek closer ties with Russia and fight against “Brussels centralising power”.

“We want to be part of the EU but not to lose our identity,” voter Helwig Leibinger told AFP at Hofer's final rally in Vienna on Friday.

“We want a commander-in-chief of the armed forces who can give the right orders.”

Although Austria's presidency is largely ceremonial, observers fear a win for Hofer, 45, would trigger a domino effect in the wake of key elections next year in France, Germany and The Netherlands.

Populist groups across Europe, on the right and the left, have benefitted from a growing sense of unease about globalisation, multiculturalism, rising inequality, and austerity cuts.

The Austrian vote also comes on the same day as a high-stakes referendum in Italy, which could claim the scalp of its prime minister and renew chaos in a bloc already weakened by Britain's decision in June to quit the EU.

“Nationwide votes in Austria and Italy on December 4 are causing palpable anxiety in Europe that… this will be the day when the sky starts falling,” the Financial Times wrote recently.

One worrying aspect for EU decision-makers is that Hofer's win might also pave the way for a return to government of his popular FPOe, founded by ex-Nazis.

Some 6.4 million voters are eligible to cast ballots at polling stations which opened at 0600 GMT and will close at 1600 GMT. Exit polls are expected shortly afterwards.

Polls suggest that Hofer, described as the far-right's “friendly face”, is neck-and-neck with ex-Green party chief Van der Bellen. The 72-year-old, who runs as an independent, won by just 31,000 votes in May.

The re-run marks the end of an ugly 11-month campaign, which saw Hofer posters being defaced with Hitler moustaches and Van der Bellen's with dog excrement.

Van der Bellen said people should be guided by “reason, not extremes” while Hofer promised “a safe Austria” for generations to come.

The far-right candidate has largely steered clear of inflammatory rhetoric, instead tapping into public anxieties about record immigration and rising unemployment.

His polished style saw him triumph in a first round in April, sensationally knocking out candidates from the two main centrist parties that have dominated Austrian politics since 1945.

What a Hofer victory might mean remains unclear. He wants more Swiss-style direct democracy, including a referendum on Austria's EU membership if Turkey joins or if the bloc becomes more centralised.

More realistically his victory might prompt the two main parties to pull the plug on their unhappy union and call fresh elections, benefitting the poll-leading FPOe.

In 2000, over 150,000 people had marched in Vienna against the FPOe — then led by the late, SS-admiring Joerg Haider — after it entered a coalition with the conservative People's Party.

But observers say the far-right's rise to power may not trigger the same backlash now that populists are gaining ground across the continent.