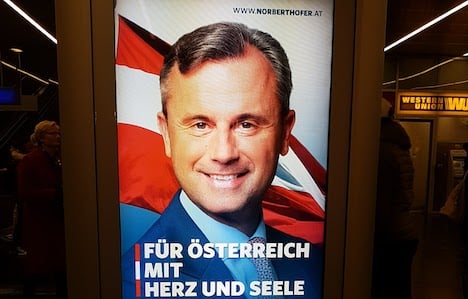 The mild-mannered 45-year-old, a gun enthusiast who has walked with a cane since a 2003 paraglider accident, is a key figure in the anti-immigration Freedom Party (FPOe). Behind the smile, he is a true-blue ideologue and no fan of the European Union.

The aeronautical engineer turned politician, a father of four, was born into a middle-class family as the son of a local councillor from the centre-right People's Party.

It was Hofer, together with chief FPOe strategist Herbert Kickl, who persuaded Strache to tone down the party's often aggressive anti-foreigner message and to focus on issues like inequality too.

Together with a savvy use of the internet, the strategy paid off. The FPOe scores over 30 percent in polls ahead of the next general election, scheduled for 2018, with voters deserting the more mainstream parties.

It also helped Hofer — with the slogan “unspoilt, honest, good” — top the presidential election first round in April with 35 percent and knock out the two government-backed candidates.

In a runoff against independent ecologist Alexander Van der Bellen in May, he lost by just 31,000 votes. But the FPOe cried foul, securing this Sunday's re-run because of irregularities.

Immigration has not been a major issue in Hofer's campaign. Instead he focused on themes like wanting more Swiss-style direct democracy and economic reforms.

While data show his core support to be among working class men without a school diploma, and in rural areas, he has also won backing right across Austrian society.

But despite the softer image, the FPOe remains the natural party for the considerable section of society uncomfortable with globalisation and issues like gay marriage and, most of all, immigrants.

And Hofer panders to this, albeit mostly in moderate tones, calling for Austria's borders to be “protected” and warning against the “dangers of a wrong immigration policy”.

Islam “has no place in Austria” since it poses a danger to the country's Judeo-Christian and humanist values, he told a young Austrian Muslim on a talk show in May.

Unguarded comments also show a sharper side. Van der Bellen is a “communist”, he said on November 11, and no Muslims work in caring for the elderly — both claims wildly inaccurate.

He is an honorary member of a pan-Germanic student fraternity that according to its founding charter rejects the “historically incorrect fiction of an 'Austrian nation'”.

Hofer, like other FPOe members, has also on occasion worn a cornflower, used by banned Austrian Nazis in the 1930s to identify each other. He insists it's for the pretty blue, the FPOe's colours.

And while Hofer may strike a more moderate tone, his party does not. Strache recently called German Chancellor Angela Merkel “the most dangerous woman in Europe” and warned of impending “civil war”.

Analyst Thomas Hofer (no relation) said that the candidate has toned down the party's message because the FPOe's base is not enough to win over enough voters to win the presidency.

But don't be fooled, he said. “He is the one who is responsible for the current FPOe programme. Of course he has the same policy issues as… Strache,” the expert told AFP.

Hofer also is deeply critical of the European Union, at least in its current “centralised” form. “If Austria wasn't a member and wanted to join, I would vote 'No',” he has said.

He wants a “Europe of fatherlands” and a referendum on Austria's EU membership — if Turkey joins the bloc or if Brussels takes too much power from member states.

What all this will add up to as president remains to be seen.

Since 1945, Austria's president has performed a largely ceremonial role, but the constitution gives the head of state considerable powers — untapped so far — including to fire the government.

“You'll be amazed what's possible,” Hofer said in April, a comment he later disavowed but which his opponents have made much of.