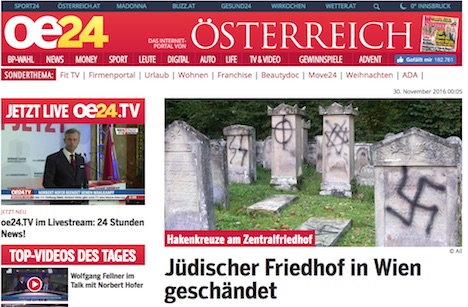 In a story on its web site, the newspaper headline said “Jewish cemetery in Vienna vandalized.”

A picture with the story shows an old cemetery, with Jewish gravestones daubed in Nazi symbols, including the SS and Swastika.

The picture is labelled 'Swastika in Central Cemetery.'

Social media sleuths however have tracked down the source of the images, coming from the town of Freudental in Germany in 2007.

One commenter, Michael H. wrote “This is the worst Nazi-style propaganda. Simply disgusting. The pictures are from 2007.”

Ingeborg K. added “Has the Fellner press no shame? The photo is from 2007, from Freudenthal in Baden-Württemberg.”

Even if the quotes and allegations in the article are true, it's highly misleading for the newspaper to publish pictures taken nearly ten years ago in a different country, and imply with the picture caption that it took place in Vienna.

Above: OE24's cover story, with the picture from Freudental in 2007 below.