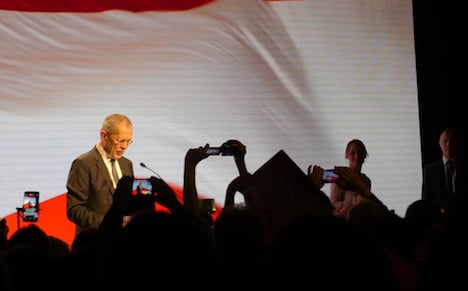 A victory on Sunday for Norbert Hofer from the anti-immigration and EU-critical Freedom Party (FPOe) would make him Europe's first far-right elected president since 1945.

The Austrian presidency is largely ceremonial but it would be another triumph for populist politics a month since Donald Trump's US election victory and five months after the British chose to leave the European Union.

The election comes on the same day as a closely-watched referendum in Italy and ahead of elections next year in France, Germany and the Netherlands where anti-mainstream and anti-immigration forces are forecast to do well too.

“That a far-right candidate for a party founded partly by Nazis and with a history of anti-Semitism could be so close to power at the heart of Europe is self-evidently troubling,” a Financial Times editorial said this week.

“But it should be a wake-up call to mainstream politicians rather than a cause for despair.”

One voter, Helwig Leibinger, told AFP at Hofer's final rally in Vienna on Friday that “we hope that Hofer can ensure that our borders remain closed, that we have controls, that we have security”.

“We want a commander-in-chief of the armed forces who can give the right orders,” he said.

“There are new parties representing different points of view on the rise… We want to be part of the EU but not to lose our identity.”

The FPOe is the “xenophobic face of Austria,” Vienna's centre-left Mayor Michael Haeupl. The country doesn't need someone who will “bring shame on Austria”.

Polls suggest that the contest between gun enthusiast and former aircraft engineer Hofer, 45, and independent Alexander Van der Bellen, 72, a former head of the Greens and economics professor, is too close to call.

Hofer won the first round in April, knocking out candidates from the centre-right and centre-left that have dominated national politics since World War II.

Van der Bellen won a May runoff by just 31,000 votes but the FPOe got the result annulled due to irregularities. This time there are 20 percent fewer postal votes, which might benefit Hofer, experts say.

The campaign, which has lasted 11 months including the first round in April, has become increasingly bitter. A final TV debate on Thursday saw Hofer call Van der Bellen a liar 24 times, vice versa three times.

Hofer posters have been defaced with Hitler moustaches, Van der Bellen's with dog excrement. Hofer has called his challenger a “communist” and a “fascist green dictator”, while Van der Bellen has labelled Hofer a “demagogue”.

The Die Presse daily dubbed the final debate a “key scene in the screenplay of the slow decline of Austria's political culture”. The Oesterreich tabloid's front page headline on Saturday was “Hass-Wahl” (“Election of Hate”).

Populist groups across Europe, on the right and the left, have benefitted from a growing sense of unease about globalisation, multiculturalism, growing inequality and austerity cuts.

“There is huge frustration,” political analyst Thomas Hofer (no relation) told AFP. Voters are “flocking to populist movements and the easy answers that are offered by those parties.”

What a Hofer victory might mean is unclear. He says he wants more referendums, including on continued EU membership if Turkey joins or if the bloc becomes more centralised.

“You'll be amazed by what's possible,” Hofer said before the first round, a comment made much of by Van der Bellen and which Hofer says he regrets having uttered.

More realistically, though, his victory could prompt Kern and the centre-right to pull the plug on their unhappy coalition and call early elections. And leading the polls right now? None other than the FPOe.