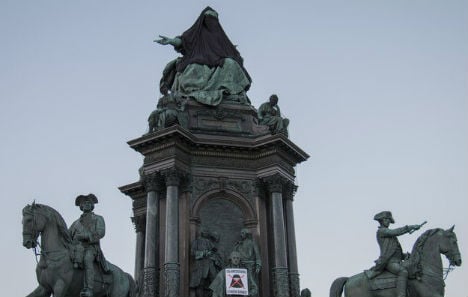 The black veil was placed on a statue of former Archduchess of Austria Maria Theresa – which lies between the Kunsthistorisches and the Naturhistorisches museums. Maria Theresa was well known during her reign for her devout Catholic faith, her anti-Semitism, and her intolerance of other religions.

In a press release, the group said they carried out the protest early on Tuesday morning and had to use a cherry picker to be able to reach the 65 foot high statue’s head. They also placed a sign at the bottom of the statue reading, “Islamisation? No thanks!”. Tuesday marked the anniversary of Maria Theresa’s death.

In a post on their Facebook page the group said that it demands “a remigration of all illegal migrants and those Muslims who reject our social order,” and went on to say, “furthermore, the political persecution of those people who are concerned about the future of Austria and the fact of the Islamization of our country must cease.” People who post hate speech on social media in Austria are increasingly being prosecuted.

Police confirmed that they are investigating the veil protest. “The identities of the activists are well-known, and the Office for the Protection of the Constitution is also investigating the incident,” police spokesman Paul Eidenberger said.