Eight things Austrians do that can make foreigners feel awkward

We all like living in Austria - why else would we be here? And by and large the people are wonderful, but some things they do still make us hot under the collar.

They love to smoke indoors

Austria’s smoking ban is much more relaxed than most other western countries. It is still possible to smoke in many restaurants, bars, cafes, clubs and even offices.

For non-smoking Brits or Americans, the often very public smoking seems completely alien. After sitting in a smoke-filled bar you may well return home at night to find your clothes reek.

Austrians will also light up at train station platforms, and after a couple of drinks the underground stations can become smoking zones too.

A tighter smoking ban came into effect in November of 2019, but it is still not uncommon to see people lighting up in places they otherwise wouldn't.

They just don’t seem to take the ban as seriously as we do.

Smoking is also a serious problem for young people, as up to a third of 16-17 year olds are regular smokers.

The waiters here are renowned for their grumpiness. The “customer is always right” rule just doesn’t really apply here.

Don't be in a rush to order or even to settle your bill in many Austrian restaurants, as the waiter will often pay you zero attention - and expect them to argue back if they get your order wrong. Plus you will get nasty looks if you leave a stingy tip after such treatment.

They are very direct

Some cultures wind everything they say into convoluted sentences, for fear of being thought rude. In China, saying 'no' to people directly can cause terrible offence. That great ambassador of Britishness, Hugh Grant, can't finish a sentence without stuttering “I’m so terribly sorry.”

But Austrians tend to cut the small talk, and say it straight.

“Pass the salt” will do nicely and won’t come across as impolite. And it’s not just trivial conversation either.

You can meet someone in a bar, and rather than exchanging niceties, the first question will be: “So why did you Brits vote for Brexit?” It may take time to get used to it, but you do eventually realise it’s not impolite. In fact, you'll soon find it saves time! 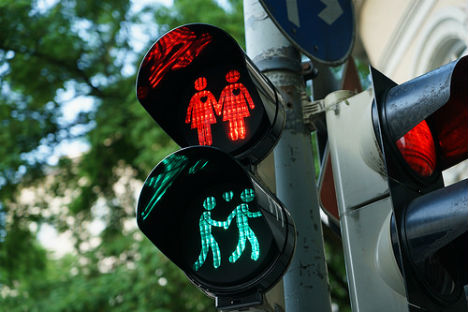 The lights are cute, but beware crossing when they're red! Photo: nicokaiser/Flickr

They excel at telling people off

Americans, Brits and Canadians are often struck by the reprimands they receive when they first arrive in Austria and don't abide by the rules.

If a kid has his shoes up on the seat on the bus, it's quite normal for a fellow passenger to lean over and ask him to put them on the floor (warning: you can even be fined for putting your shoes on the seats!)

Jaywalking, or crossing roads when there’s a red light, is against the law in Austria. You’ve probably been reprimanded by members of the public (particularly older people and those with kids) if you did dare to cross when the light is red, even if there wasn’t a car in sight.

In Austria people often have no qualms about telling you you’re doing something wrong, regardless of whether you’re a young child, or a grown adult.

In Britain and America, openly staring at someone is considered rude, but in Austria it seems to be quite normal.

Whether someone is admiring your outfit, or just likes the way you look, expect to be stared at - particularly on public transport and if you're wearing anything unusual.

We find a friendly smile soon makes the person staring feel uncomfortable and look away.

They prefer to pay with cash

In many ways Austria is known for being technologically progressive and efficient - but many foreigners will soon realise that this is a bit of a myth.

Sometimes it seems that no one is more technophobic than the Austrians. The most surprising example is how rarely Austrians use debit or credit cards. With contactless technology now available in almost every shop in Britain or the US, it seems bizarre that many restaurants in Austria are cash only.

It can be pretty embarrassing when trying to pay for something and the staff say they don’t accept card. The result is all too often a humble apology as you ask the waiter the way to the nearest cash machine - and let's hope there is one within walking distance!

Austrians love making everything official by what many foreigners may consider to be an outdated system - postal mail - and they also excel in writing terrifying letters.

So if you forget to pay a bill or fail to register yourself with the authorities on time, don’t be surprised to get a letter by special delivery - threatening a prison sentence if you don’t pay up or pay the fine pronto.

A simple phone call or - of course - letter explaining that you've already made the payment online will usually diffuse the situation.

Although if you think that you've overpaid your health insurance or social insurance contributions be prepared for a long and lengthy process, with not the most friendly or helpful of bureaucrats.

Perhaps because the US and Britain have such long histories of inward migration, the words German-speakers use can seem outdated to us.

For example, Austrian citizens whose parents or even grandparents came from Turkey are still often referred to simply as "Turks" rather than Austrians.

And Americans who find costumes like "Red Indian" and blackface offensive may also be surprised to find these readily available in fancy dress shops in Austria, where people might not understand the cultural significance.

You’ll also notice some politically incorrect names on menus - such as the popular dessert Mohr im Hemd (a delicious chocolate pudding served with cream which is known as a “moor in a shirt”).

This article was first published in November of 2016.