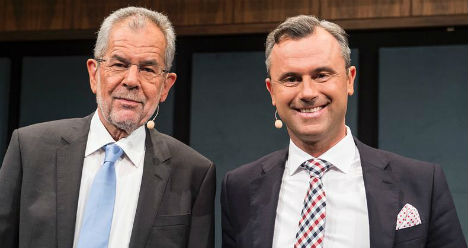 Parallels are now being drawn between Norbert Hofer, the candidate from the populist right-wing Freedom Party (FPÖ), and the billionaire Trump. Some commentators are speculating that Hofer's opponent, former Green party head Alexander Van der Bellen, could face the same fate as Hillary Clinton.

Political commentator Heidi Glück told the Kurier newspaper that she believes Trump’s success could give new impetus to Hofer’s campaign. “The triumph of a populist in the US will strengthen the populist vote here”, she said.

Glück sees similarities between the two election campaigns: “Like Trump, Hofer stands for the anti-establishment. He says that Van der Bellen is the candidate of the elite. Trump said the same thing about Clinton. He also campaigned against political correctness – so does the FPÖ.” She added that FPÖ supporters tend to be people who feel frustrated with and unsupported by the current political system.

Political strategist and former SPÖ party manager Josef Kalina also sees similarities between the two election campaigns, but believes that both Hofer and Van der Bellen stand to benefit from Trump’s win. “Hofer can try and strengthen his anti-establishment message, and Van der Bellen should try to distance himself from it.”

He thinks that both candidates must engage with people’s fears over “unemployment, pensions and immigration, take them seriously and try and offer solutions. Whoever ignores the topic of immigration, will lose this election. And even if Austria is still one of the richest countries in the world, you can’t ignore declining net incomes, especially for families.”

He warned that after Trump’s victory Van der Bellen’s campaign can’t just be about safeguarding Austria’s reputation abroad. “Many people will now be thinking, if it’s OK for America to elect Trump, then what’s wrong with Austria electing Hofer.”

Wolfgang Bachmayer, the boss of OGM market research company, thinks Hofer will have to increase his efforts to mobilise supporters and that Van der Bellen must try and reach those voters who are still undecided, or are inclined not to vote at all.

He points out that 12 formerly conservative mayors from the western state of Vorarlberg have now declared that they will vote Van der Bellen as they are concerned that if Hofer is elected, Austria will no longer be seen as “cosmopolitan and hospitable” to foreigners and that the tourism industry could suffer as a result.

Vienna’s Social Democrat mayor, Michael Häupl, has appealed to people to vote for Van der Bellen – saying that Austria needs a president who “connects” and doesn’t divide the country.

The anti-immigration Freedom Party is one of several parties to have gained in support in Europe in the past year on the back of the migration crisis.

In May Hofer narrowly failed to be elected president in a runoff election after being beaten by Van der Bellen by just 31,000 votes. The FPÖ managed to have the election annulled in July however because of procedural irregularities.

Initially scheduled for October 2nd, the re-run of the vote was postponed in September to December 4th because of glue on postal votes failing to stick properly. Hofer and Van der Bellen are running neck-and-neck in opinion polls.