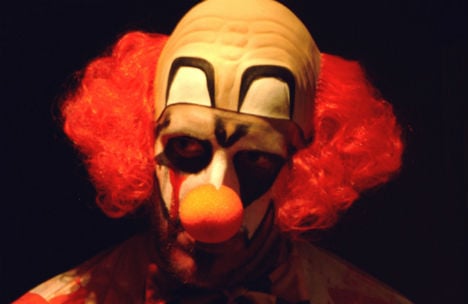 A fully grown man in a clown suit was seen hanging around Praterstern’s platform 2 on Tuesday night, and frightening hundreds of passengers who were waiting for a train.

There were some unconfirmed reports that the unidentified man was even armed with a machete. When the train entered the platform, the clown reportedly ran off.

Austria’s first scary clown sighting was last week – when a driver in eastern Styria was shocked to see a clown standing in a parking lot. It emerged that the clown was a schoolboy who wanted to prank someone. His mother later apologised for his behaviour on Facebook and said he would be punished.

The Red Noses Clowndoctors International group, which is based in Vienna and is the largest foundation of hospital clown organisations, said it was concerned by the recent 'creepy clown' sightings.

The group's artistic director, Giora Seeliger, said: “We are very concerned by the latest developments involving the activities of people distorting the image of the clown. This image does in no way reflect the true philosophy of the clown and endangers the hard work of thousands of artists working as clowns, especially professional hospital clowns who constantly contribute to the wellbeing of patients worldwide.”
Several other clown-related incidents have been reported across Europe in the past weeks on the back of a worldwide 'killer clown' trend.

In Sweden, an eight-year-old boy leapt from his balcony to escape from a man dressed as a clown who knocked on the door.

With creepy clown sightings multiplying this month in the UK, British police have asked people not to go outside dressed as clowns. And Swedish police warned people not to participate in the trend – saying that they could end up in a police cell suspected of aggravated threat.