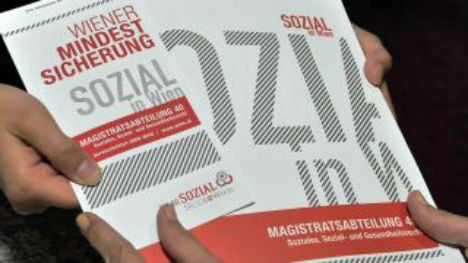 People granted asylum in Austria are typically awarded up to €914 a month to cover their basic living costs (Mindestsicherung) but many areas – including the states of Lower and Upper Austria have reduced this to €520.

Critics of the Vienna government – a coalition of Social Democrats and Greens – say it has vastly underestimated the cost of providing basic benefits to asylum seekers.

From 2011 to 2013 the number of benefits claimants who relocated to Vienna was around four percent. That figure doubled in 2015 and is now around eight percent (14,414 people).

The opposition ÖVP party claims that Vienna has a “budget crisis” because of the increase in spending on social welfare and wants a special meeting of the city council to discuss record unemployment and debt levels and a refusal to reform the system.

Sonja Wehsely, the city councillor responsible for social affairs, says that only a small percentage of people are totally reliant on the Mindestsicherung, and that the number of “large refugee families” is few.

But she admitted that poor economic growth, a lack of employment opportunities and a rise in the number of people being granted asylum has led to increased costs, and that this has become political fodder for the ÖVP and right-wing Freedom Party (FPÖ).

She argues that if the Mindestsicherung benefit is cut then vulnerable people risk falling into homelessness, poverty and crime, and that the benefit exists to create social equality and peace in the city.

Reinhold Lopatka, political leader of the ÖVP parliamentary group recently said the social system is especially unfair in Vienna and that refugees who have been granted asylum status in Austria get more money from the authorities than farmers receive in pension benefits.

“A farmer who has been working hard his whole life has spoken with me. He now receives pension benefits of €620 and his son has to subsidise him so that he can feed himself. Currently migrants in Vienna receive €837.60, although they have never contributed to our benefits system”.