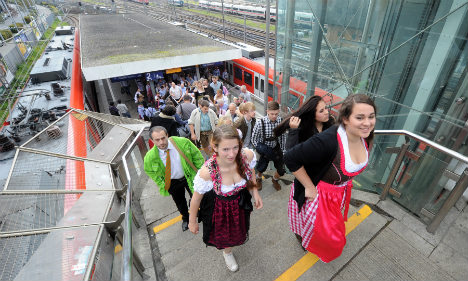 He had just spent two days inside the tents of Munich's Wiesn, where the brew is notoriously strong. So carefully checking the destination name before he boarded a train at Munich central station on Sunday morning was no doubt second on the mind of the 24-year-old Austrian to getting a bit of shuteye.

Unfortunately, his lack of care meant that he ended up heading towards Würzburg, a town 280 kilometres north of Munich, rather than to his home in Salzburg, situated in the opposite direction across the Austrian border.

According to the Süddeutsche Zeitung, the young man fell asleep as soon as he had found a place to sit in the carriage and when he woke up several hours later, roughly a third of the way up Germany, he was 430 kilometres from home. He corrected his mistake and jumped on the next train back down south.

But between Würzburg and Nuremberg, he came to the attention of a conductor, who noticed that he didn’t have a valid ticket.

Only once his details were taken down, and his address had been confirmed in cooperation with Federal Police, was the young man allowed to continue his long journey back to Austria.

So now, as well as facing the hit of a weekend at Oktoberfest, where a litre of beer costs close to €11, the man will have to stump up a fine to Deutsche Bahn.