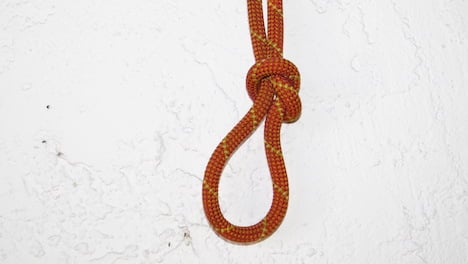 The 29-year-old, named as Pamela F. by news daily Heute, was found guilty of deliberately causing grievous bodily harm with fatal consequences, but only received a two-year suspended sentence over the man's death in 2015, due to extenuating circumstances.

The woman said the 45-year-old client paid her 100 euros ($113) to help him lose consciousness by strangling him with the shoelace while he tightened a rope attached to the wall around his neck.

She said the man had signed a piece of paper saying he assumed “complete responsibility for all risks and health damages” and that he was “fully aware that such a fetish can lead to death”.

“He said I shouldn't be afraid or panic when his face turns red. I wasn't to worry,” the woman told the court. “He was an adult. I assumed that he wouldn't put himself in danger.”

With his head in the noose, his face a different colour and his hands and feet twitching, the woman tightened the lace for a few seconds, she said. She then eased it, got dressed and left, as agreed.

But some 90 minutes later after the man failed to contact her, she began to panic, returned the hotel and knocked on his door.

The receptionist was unconcerned, saying: “If he's dead we'll find him in the morning anyway.”

But the woman called the police who found the man dead in the room just after midnight.

Presiding judge Nina Steindl said the verdict was mild because the woman — who no longer works as a prostitute — “made a good impression” and that her behaviour since the tragedy showed she was “not a callous person”. The court heard that she suffers from nightmares.

Christian Reiter, a court medical expert, said the man had been strangled for a least a minute with the shoelace and that this alone was enough to cause a loss of consciousness and death.

“There was no possibility for him to free himself from the situation,” Reiter told the court.