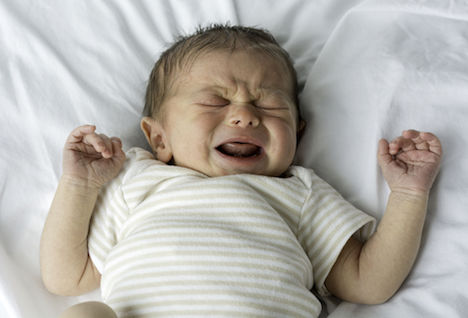 A newborn complaining. Photo: Evan Amos/Wikimedia
It seemed too good to be true. The story which appeared this week in one of Austria's largest circulation magazines seemed to be a real scoop.
The timeless tale of an ungrateful child combined with privacy fears associated with universal access to the Internet meant a story with long legs — but gradually, as reporters did their jobs, questions were raised.
According to the German language Morgenpost, the editors of the Austrian weekly “Die ganze Woche” which first published the piece were short on details.
The first question related to the identity of the young woman.  With strong personal privacy laws, the publication chose to change the name of the daughter to Anna Maier.  This is not unusual in itself, but it makes fact checking hard to achieve.
The next issue was the lawyer cited in the initial report.  Michael Rami, who acknowledges his involvement in the report, denied that he represented the young woman directly, but instead was retained simply in an advisory role.
There are other contradictions in the story, in particular relating to the involvement of the court.  If the young woman lives in Carinthia as claimed, then the relevant court would be in Klagenfurt — but a check with that courthouse didn't show any known cases on the docket for November.
A further concern is the secretive nature of the publishers involved with the paper.  According to Morgenpost, it's known internally as a “secret order”, with its editor, Burkhard Trummer, insisting in an interview with the Frankfurter Allgemeine Zeitung that “the story is true”.
Unfortunately, Trummer has been unable or unwilling to provide evidence, with journalists and the editorial team allegedly avoiding returning phone calls.
Whatever the truths of the case, it's clear that awareness of the issue of the risks of sharing personal information in public is becoming more widespread.
Perhaps that's the most important lesson to be drawn from this case, followed closely by the old adage of not believing everything you might read in a newspaper.