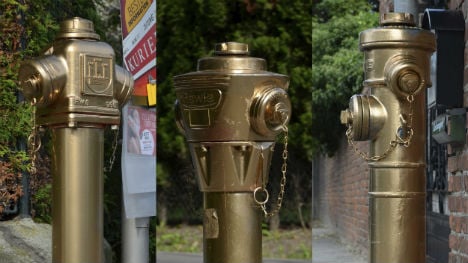 In the past three weeks at least ten fire hydrants have been sprayed a brilliant gold during the night. The police have dubbed the sprayer “Goldfinger” after the James Bond villain who gets one of his henchmen to kill a Bond girl by covering her in gold paint.

The mayor of Klosterneuburg, Stefan Schmuckenschlager, complained to the police after noticing the gilded hydrants – as the sprayer has effectively damaged council property.

However, many locals say they like the new-look of the hydrants and think it would be wrong to punish Goldfinger for making the town more beautiful and bringing it to wider attention.

Chief Inspector Georg Wallner told local paper Niederösterreichische Nachrichten that “investigations are ongoing” but would not go into more detail, apart from admitting that usually the police don't deal with such artistic vandals.

Just in the past few days a couple of gold-sprayed fire hydrants have also been discovered in the nearby town of Korneuburg as well, just across the Danube river.