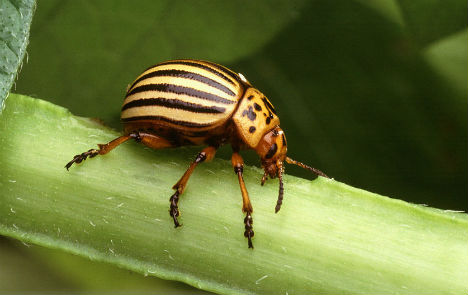 Locals said the beetles were everywhere in the surrounding fields and were crawling all over the walls and windows of homes.

Residents of the village in Austria’s Weinviertel region said they’d never experienced such a swarm of the brown and yellow striped beetles before, with the head of the local Chamber of Agriculture, Roman Spiess, comparing it to “one of the ten Biblical plagues”.

Agricultural experts think the beetle invasion may have been caused by the amount of rain that Lower Austria had over the summer. There is no effective means of eradicating the beetle, and the village had to wait until the pests had eaten everything they could and then flew off in search of more food.

Potato bugs are a major pest for potato crops, as well as tomatoes and aubergines. They are very prolific, laying as many as 800 eggs.

Originating in North America, the potato beetle became a problem pest in Germany after World War II, with the GDR government later claiming that the beetles were dropped by American planes. In East Germany they were known as Amikäfer (Yankee beetles).